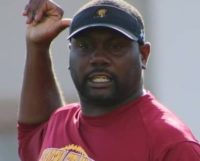 Antyone Sims has been named the new HC at Arcadia

Sims had an overall record of 22-19 in his four-year run at Muir after taking over for John Hardy in 1215. the Mustangs only playoff appearance was in 2016 where they fell to Antelope Valley in the first round of the Division 9 playoffs. Last year Sims coached safeties at Pasadena City College.

Sims takes over for Andrew Policky who stepped down following last season after six years. The Apaches appeared in the CIF Division 8 Finals in 2018 where they fell to Kaiser 38-35 but went 4-6 last year and missed the playoffs.

Sims is excited to be back and running his own program.

“I feel blessed to take over a program that has so much history. I am excited to be back in the Pacific League and looking forward to getting to work with the staff and meeting the players,” Sims said.