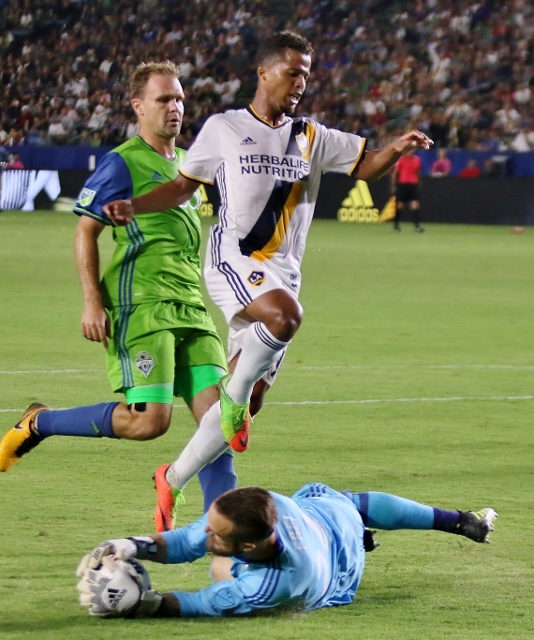 Giovani dos Santos just misses on an opportunity for the Galaxy. (Photo by Duane Barker)

(Carson) – The Galaxy played Seattle to a 0-0 tie before a sell out crowd of 25,667 at StubHub Center Saturday night in Coach Sigi Schmid’s return to the sideline.

Schmid, who previously coached the Galaxy from 1999-2004, replaced the fired Curt Onalfo Thursday. The Galaxy was aggressive from the start and had a number of opportunities but was unable to get the ball in the back of the net.

“Our offense will get better but I was happy with the effort and the fight that everybody put in for each other. It was great to be back on the sideline. I don’t know what it is but I love this game. Nobody’s ever going to take that away from me. It’s just a passion and hopefully I can convey that passion on to my players,” Schmid said.

Jella Van Damme tries to get his head on a corner kick. (Photo by Duane Barker)

The Galaxy had plenty of energy early. Gyasi Zardes had a couple of shots on goal including one in the 12th minute that flew wide left. Daniel Steres also had an opportunity but his kick sailed high.

Joao Pedro got off a blast from distance in the 21st minute but that also was high. Romain Alessandrini was knocked down by Nouhou Tolo in the 31st minute as he was on a rush on the left side but there was no call.

Zardes had another shot in the 38th minute on a boot from the the right flank but Seattle’s Stefan Frei was there for the stop.

Seattle countered later but Brian Rowe came up big in the 43rd minute as he made a nice save on a bicycle kick by Clint Dempsey. The first half ended scoreless.

The Galaxy had a slight edge on the Sounders in total shots in the first half at 6-5 and in shots on target at 2-1.

Early in the second half LA survived a scare when Steres misplayed a ball that fell to Will Bruin in front of the Galaxy net but Bruin whiffed and failed to make a play.

Five minutes later the Galaxy was threatening on the Seattle end as Pedro fired one on goal in the 51st minute but Frei made the grab in the box.

A nice cross by Alessandrini set up Emmanuel Boateng in minute 59 but his header rolled wide left.

Frei made two more saves in the next five minutes. Zardes had a chance off of another dish by Alessandrini in the 65th but a sprawling Frei covered it up.

Two minutes later, U.S. National hero Jordan Morris, who replaced Tolo for Seattle, made a big run and shot one on target but Rowe made the save.

Boateng stole the ball at midfield and delivered a strike to Zardes on the run in the 72nd but his bullet from the right side was wide and tipped away by Frei.

The Sounders gained an advantage when Jelle Van Damme picked up two yellow cards – in the 81st and 86th minutes – resulting in a red card and a rejection from the match.

Four minutes of additional time were added to the second half but neither team broke through as it ended with zeroes.