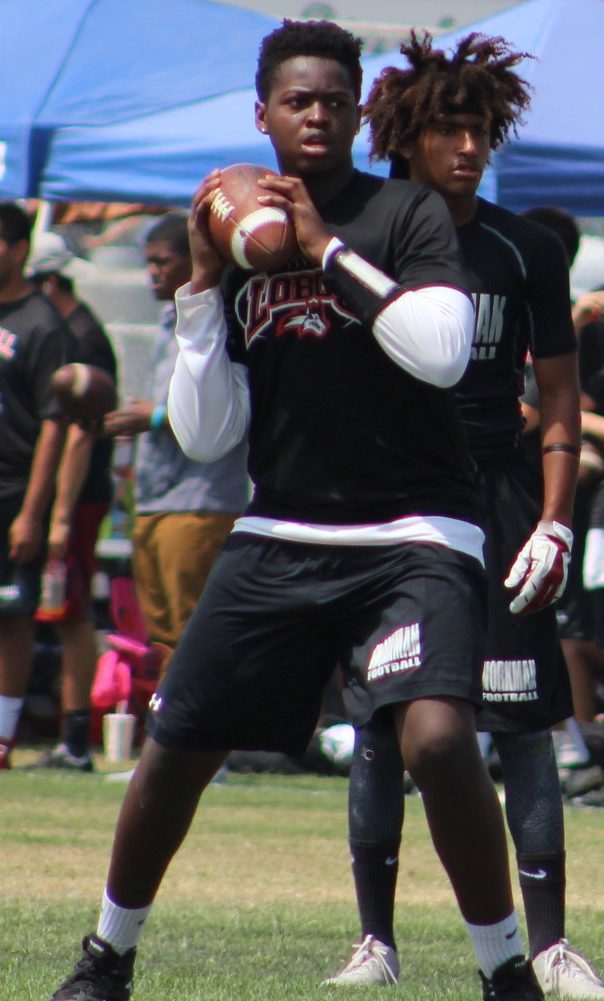 Workman Quarterback Ike Udengwu III has had a big summer

Nogales was the surprise of the league last year until a late loss to Sierra Vista did the Nobles in. Duarte, under HC James Heggins, has the talent to repeat in league. Workman, with new head coach Oscar Robles, has a new energy and excitement that the Lobos have been missing for quite some time.

Second year Gladstone head coach Ted Clarke has had the Gladiators at seemingly every passing league and lineman camp that has been scheduled this summer. How will it translate to the field for the Gladiators? Can Azusa or Sierra Vista compete for a title in a league that appears to be wide open.

Duarte: The Falcons looked like a team that was going to run the table last year when they were suddenly bit by a game Nogales team. They still won the Montview League title with a 4-1 record and advanced to the playoffs before losing to Laguna Beach. Duarte has some key talent returning in an effort to repeat. Quarterback Devon Hemsley, who threw for 1,812 yards and 16 touchdowns and also ran for 378 yards and five scores is back at the controls. He has a nice target to throw to in Martin Keeley who had 476 yards receiving and five TDs last season. Keely also plays cornerback where he had 55 total tackles last year. Noah Bouza will be on the opposite side of Keeley in the secondary. In 2017 had 33 total tackles. It won’t be easy, in the Montview everybody has a shot, but the Falcons look like the team to beat.

Workman: First year head coach Oscar Robles found an interesting place to find some football players. No he didn’t frequent all the passing leagues to recruit talent or work the phones of area coaches to see if they knew of any available bodies. Instead he found several players right in his own backyard – on the Workman campus. “Coach Perez (Northview HC Marcel Perez) used to tell me you can find a lot of talent or your own campus so that’s what I did,” Robles said at the SGV Shootout at Arroyo in July. “Most of them were on the basketball team.” Whether it was the basketball team or they were simply sitting in the classroom Robles got them out. The numbers were good in the summer and there is a an air of excitement for the Lobos. Quarterback Ike Udengwu III, who stands 6-4 and throws a nice ball is one of the basketball players. “He’s been progressing tremendously and is really looking like the quarterback we envisioned him to be. I truly think he has the physical tools and attributes to be a D1 quarterback,” Robles said. “He’s 6-4 and has a rocket for an arm.” James Odom and Brandon Quintana will line up at wide receiver and should be go to guys for Udengwu. Travon Tolliver is expected to do big things at running back as long as OL Jason Cardona is opening the holes up front. Defensively DBs Francisco Andrade and Marcelo Santos and lineman Carlos Duran should be in shut down mode.”When I first got hired we only had 22 kids in the program consistently coming. We now have a total of 68 and counting as more of the kids on campus are being attracted to the change of culture from our football program,” Robles said. “I like to think of the state of the Workman football program in April as a puzzle which had all of the right pieces to complete, but just needed those pieces to be put together. Through the hard work that my staff and players have put in these past couple of months, I truly believe we have the opportunity to be a playoff team in our division along with competing at the top of our league.”

The puzzle could come together early as the Lobos have a rivalry game right out of the gate facing La Puente in Zero Week. There should be no problem with depth and if the basketball players can play football, then it should be a good season for Robles and the Lobos.

Nogales: The Nobles are out to prove last year was no fluke. Although they ended up missing the playoffs, a 3-2 league record and an overall record of 8-2 was a monumental  achievement for Nogales. The Nobles lost quarterback Matthew Olguin to graduation but Josh Lopez looks ready to take over behind center. Running back Andrew Carrazco returns after rushing for 666 yards and five touchdowns a year ago. Carrazo can also catch the ball out of the backfield as he showed with over 300 yards receiving. Isaiah Tennell, a 6-1, 205 pound senior linebacker will anchor the defense. Tennell is one of eight returners on the defensive side of the ball. Nogales also features five returners on offense. Anything close to 8-2 would be considered a success but the Nobles want to take that next step in 2017. The goal is the playoffs.

Azusa: This used to be a league that the Aztecs owned, but long time coach Joe Scherf left and Azusa is now finding itself in the middle of the pack. Last year Azusa went 3-2 in league (three way tie for second) but they did manage to win a first round playoff game before falling to Santa Ana in round two. On offense the Aztecs will rely on Angel Perales who ran for 197 yards on just 42 carries to supply the ground attack while receivers Julian Ledesma and Nick Smaniego both are back to get the passing game working. Linebacker Nathan Cornejo will be in the middle of the Aztecs defense. The post season is a possibility but Azusa will need at last three wins, maybe four, in league which this year will be no easy task. The Aztecs open at home against Bassett on September 1.

Gladstone:
If you’ve been out to see any passing leagues or linemen competitions this past summer you more than likely have ran into Gladstone. The Gladiators have been everywhere. “The team is learning to work, to grind, to take care of the little things,” said head coach Ted Clarke. “We are striving to be more consistent with every aspect of playing football.” Gladstone went 0-10 last year and Clarke is determined to not let that happen again. Offensively the Gladiators have 4 or 5 quality running backs that will sort themselves out once the season starts. Alex Osuna returns at wide receiver and is bigger and stronger and Junior Granada will anchor a physical line. Defensively Jordan Gregory and Carlos Enis look solid at defensive end. Jorge Sanchez, Adan Orozco and Jose Mondragon are all set at linebacker after a solid camp. The returning players are a year older and year wiser and Clarke, now in his second year, knows what to expect. One thing he doesn’t expect is a winless campaign. “If this group takes care of their business, it’s gong to be a good year,” Clarke added.

Sierra Vista: Last year Sierra Vista went 7-4 overall and made the post season before falling to Santa Clarita Christian in the first round. All good there. The Dons then lost their quarterback, top running back and leading receiver to graduation. Not so good. Toby Garcia who rushed for over 160 yards last year should be the main man on the ground. Andrew Alvarez, who had close to 350 yards receiving a year ago, is back as well. Alvarez will also play cornerback where he had 68 total tackles last season. If the Dons can break in a new quarterback they may have some success. If not it could be a long year. Last year’s signal caller, R.J. Pimental, accounted for over 2300 yards. That’s a lot of yardage to make up. The Dons could go 7-3, but they could also go 3-7. There’s still a lot of questions. We just don’t know if Sierra Vista has the answers.

(11580)
$19.99 (as of n/a - More infoProduct prices and availability are accurate as of the date/time indicated and are subject to change. Any price and availability information displayed on [relevant Amazon Site(s), as applicable] at the time of purchase will apply to the purchase of this product.)

(92847)
$25.00 (as of n/a - More infoProduct prices and availability are accurate as of the date/time indicated and are subject to change. Any price and availability information displayed on [relevant Amazon Site(s), as applicable] at the time of purchase will apply to the purchase of this product.)

(43338)
$59.99 (as of n/a - More infoProduct prices and availability are accurate as of the date/time indicated and are subject to change. Any price and availability information displayed on [relevant Amazon Site(s), as applicable] at the time of purchase will apply to the purchase of this product.)
Posted in High School Football | Tagged Azusa Football, Duarte football, Gladstone Football, Montview League, Nogales Football, Sierra Vista Football, Workman Football

4 Comments to "A Look at the Montview"