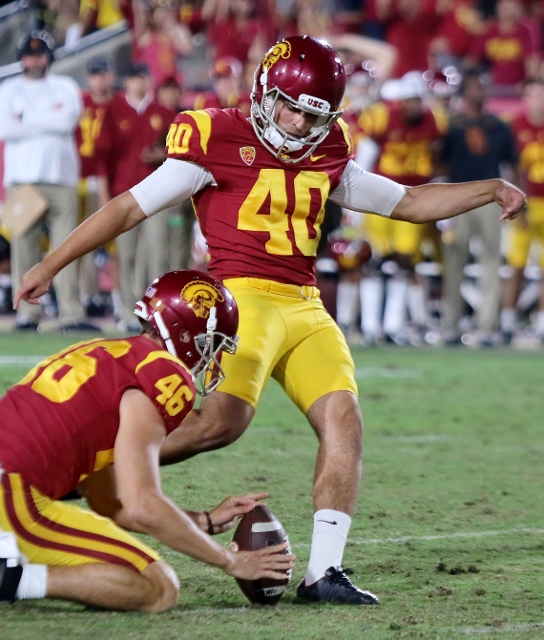 Chase McGrath boots the game winner for the Trojans! (Photo by Duane Barker)

(Los Angeles) – Chase McGrath booted a 43-yard field goal in the second overtime to lift USC to a 27-24 win over Texas Saturday night before 84, 714 at the Coliseum.

McGrath also kicked the game tying field goal as time ran out in regulation – a 31 yarder that tied the game at 17 and sent it into overtime.

It looked like Texas had pulled off the upset when Sam Ehlinger rolled right and hit Armanti Foreman on a 17-yard scoring strike to give Longhorns a 17-14 lead with 45 seconds left. But USC quarterback Sam Darnold drove the Trojans down the field connecting on passes with Deontay Burnett, Stephen Carr and Stephen Mitchell to set up McGrath’s tying boot.

In overtime Darnold hit Burnett for a 25-yard touchdown. Texas tied it with a three-yard TD pass from Ehlinger to Cade Brewer.

The USC defense then came up huge. As Ehlinger plunged into the line to pick up a couple more yards on the first possession of the second overtime, he was stripped by Christian Rector and the ball was recovered by Ajene Harris at the one- yard line. The Trojans then got the shot and McGrath was true from 43 for the winner.

Although there was a scoring frenzy at the end of the fourth quarter and into OT, it didn’t start out that way. USC was stopped twice on fourth down on its first two possessions. The second time Ronald Jones II was stacked up at the Texas one-yard line. Texas was also halted on fourth down at the Trojans 20 on its series.

On the first play after Jones was denied Jack Jones picked off Ehlinger to set up USC at the Texas 25. However USC was hurt by penalties and was forced to punt.

Rector recovered a fumble by Ehlinger on the next possession but the Trojans couldn’t take advantage as Chase McGrath missed a 46-yard field goal early in the second quarter. 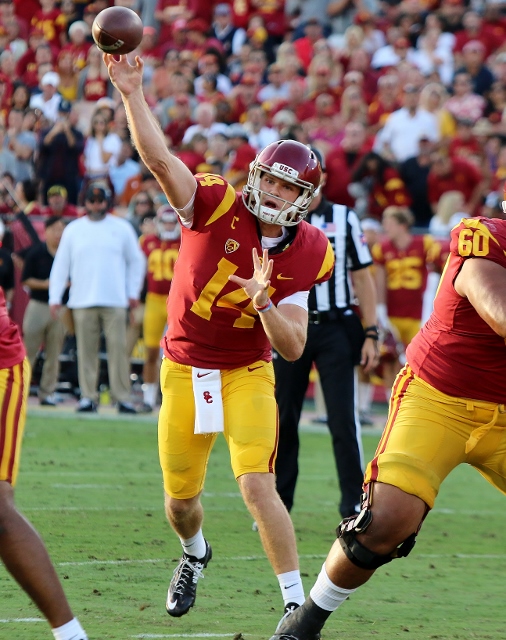 Sam Darnold found a way when he needed to to lead the Trojans to victory. (Photo by Duane Barker)

The teams then exchanged punts on the next four possessions.

USC finally broke through with 2:40 left in the first half as Burnett hauled in a 15-yard strike from Darnold to cap a six play, 37-yard drive.

Texas was then forced to punt, but on the Trojans first down DeShon Elliott intercepted Darnold and returned it 38 yards for a touchdown to tie it. 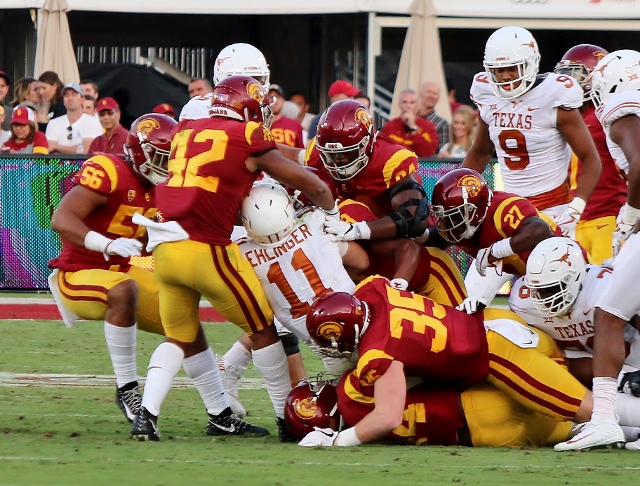 The Trojan defense got the stop when they needed it most. (Photo by Duane Barker)

USC got the ball back with 19 seconds left on its own 38 and on the second play Darnold scrambled out of trouble and found Jones who sprinted 56 yards across the field for a touchdown as the clock hit zeroes. The Trojans took the 14-7 lead into the half.

In the first half Darnold was 12-21 for 173 yards and two touchdowns along with the interception.

Joshua Rowland booted a 39-yard field goal early in the third quarter for the Longhorns to cut the USC lead to 14-10.

Neither team managed much offense in the third.

In the fourth quarter Darnold threw high and was intercepted by Elliott again to set up the Longhorns at the USC 25 but Marvell Tell stepped in front of a an Ehlinger pass to put an end to the Texas threat.

Texas then pieced together the game tying drive that Ehlinger twice kept alive with fourth down plays. The touchdown pass to Foreman came on a fourth and ten play.

But the Trojans, with Darnold at the controls and a cool freshman named McGrath, rewrote the script.

Danold finished the night 28 of 49 for 397 yards, 3 touchdowns and two interceptions. Burnett had 8 catches for 123 yards and 2 touchdowns and Mitchell had 6 receptions for 93 yards.

For the Longhorns, Ehlinger completed 21 of 40 for 298 yards and 2 touchdowns but did throw two picks. Texas only had 68 total yards on the ground.

USC improved to 3-0 on the year with the victory while Texas dropped to 1-2. USC travels to Cal next week.

(103550)
$49.99 (as of n/a - More infoProduct prices and availability are accurate as of the date/time indicated and are subject to change. Any price and availability information displayed on [relevant Amazon Site(s), as applicable] at the time of purchase will apply to the purchase of this product.)

(4948)
$11.99 (as of n/a - More infoProduct prices and availability are accurate as of the date/time indicated and are subject to change. Any price and availability information displayed on [relevant Amazon Site(s), as applicable] at the time of purchase will apply to the purchase of this product.)

Made By Me Create Your Own Window Art by Horizon Group USA, Paint Your Own Suncatchers. Kit Includes 12 Pre-Printed Suncatchers + DIY Acetate Sheet, Assorted Colors 1 Count