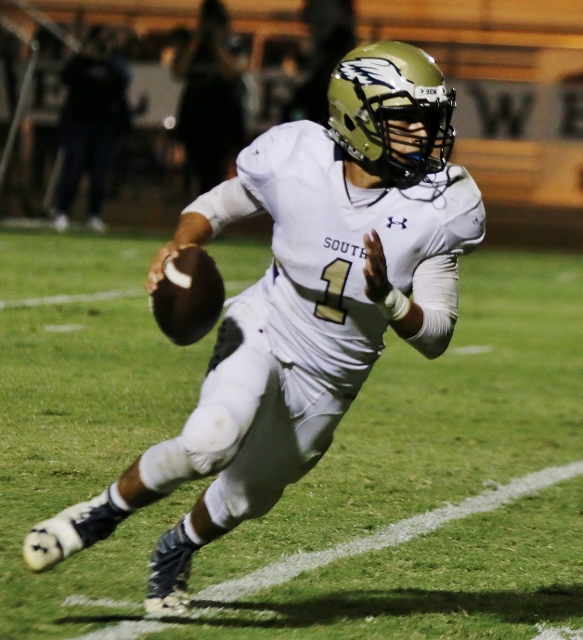 Daniel Olmos Leads the Eagles into the Semi Finals against Santa Maria (Photo by Duane Barker).

The Chargers were impressive in erasing a 21 point deficit on the road last week against Westlake. Rancho Verde has been clicking in the post season as well with big wins over Oak Hills and Hart. Things have been going Charter Oak’s way all season in reeling off 12 straight victories. The Chargers have passed every test so far this year. No reason that they can’t ace this one as well. Chargers are going to Finals.

El Toro has lost four games this year although its schedule could hardly be described as cupcakes. St Francis has been perfect except for the one hiccup at home against Cathedral. The Golden Knights have had two close games in the post season including a ten point win over Citrus Hill last week. Home field is always big in the playoffs and that should get St. Francis over the top. That and a solid performance by Darius Perrantes gets it done for the Knights. St. Francis advances.

Downey can compete with almost anybody. The Vikings have shown that throughout the season and in the playoffs. Downey has lost only twice – to Santa Margarita in the season opener and a one point loss to Paramount in overtime in league. Capistrano Valley however is on another level. After the Vikes take an hour and a half bus ride they’ll have to face a Capistrano Valley team that has won 12 straight and rolled over every opponent in its path. Their closest game was to San Juan Hills back in September when Capistrano won 14-7. Other than that Capistrano Valley has won big. In the two playoff games the Cougars have routed their opponents 35-6 and 34-7. An upset would be huge for Downey but it’s a longshot – especially on the road. Capo Valley gets the W.

Paraclete doesn’t lose at home. Actually the Spirits don’t lose at all this year- well they did once to Oaks Christian on the road – as they finished 11-1 overall. That game was on September 8 and Paraclete hasn’t lose since. Paloma Valley is solid but Paraclete is on a mission for a second straight CF title. Paraclete will play for another championship.

This is the best local matchup of the weekend. it’s also a rematch of the Division 8 semi finals last year when Burbank beat Don Lugo 44-14. Both teams moved up a division and here we go again. Both teams come in with the same 10-2 record. Burbank ran the Pacific League table while Don Lugo did lose one Mt. Baldy League game to Colony. You could probably determine the winner by flipping a coin. I’ve been burned too many times picking against Burbank. Bulldogs win it in the fourth quarter.

Everything has been coming up Mayfair this year. The Monsoons cruised through the Suburban League after losing just once in non league. Burroughs Ridgecrest finished second in the tough Mojave River League behind undefeated Apple Valley. A solid running attack with Traveon Anderson and home field advantage should be enough for the Monsoons. Mayfair by a field goal.

The Colts have kicked it into another gear in the post season. Covina took out Victor Valley on the road and then held off a tough Westminster team at home. Right now the Colts are playing their best football of the season. They will need to be at the top of their game to beat Culver City. The Centaurs have lost only once all year- a 33-14 setback to Lawndale on October 13. They love to throw it. Quarterback Jonathan Martin has aired it out for nearly 3000 yards this year. The Colts need to pound it and chew up the clock to keep Culver City off the field. It might work for awhile but in the end Culver City gets rolling. Covina’s season ends in semis.

Quarterback Blake Truhitte, all 5-6, 130 pounds of him, has done it all for Santa Maria. Truhitte has thrown for 1,949 yards and 24 touchdowns and also leads the team in rushing with 1,690 yards. South El Monte has plenty of weapons to unveil. Sal Tovar, Daniel Olmos, Richard Nava and AJ Carreon are all capable of making big plays. If the Eagles can shut down Truhitte and make somebody else beat them they have a shot. South El Monte’s offense will be fine. The defense just needs to make some stops. Oh and Eagle fans, how about some support? Last week’s crowd was lacking. South to Finals!

(19026)
$19.99 (as of n/a - More infoProduct prices and availability are accurate as of the date/time indicated and are subject to change. Any price and availability information displayed on [relevant Amazon Site(s), as applicable] at the time of purchase will apply to the purchase of this product.)

(31506)
$89.99 (as of February 24, 2021 - More infoProduct prices and availability are accurate as of the date/time indicated and are subject to change. Any price and availability information displayed on [relevant Amazon Site(s), as applicable] at the time of purchase will apply to the purchase of this product.)

(9)
$19.99 (as of n/a - More infoProduct prices and availability are accurate as of the date/time indicated and are subject to change. Any price and availability information displayed on [relevant Amazon Site(s), as applicable] at the time of purchase will apply to the purchase of this product.)
Posted in High School Football | Tagged CIF Playoffs, CIF Semi Finals, Game Night