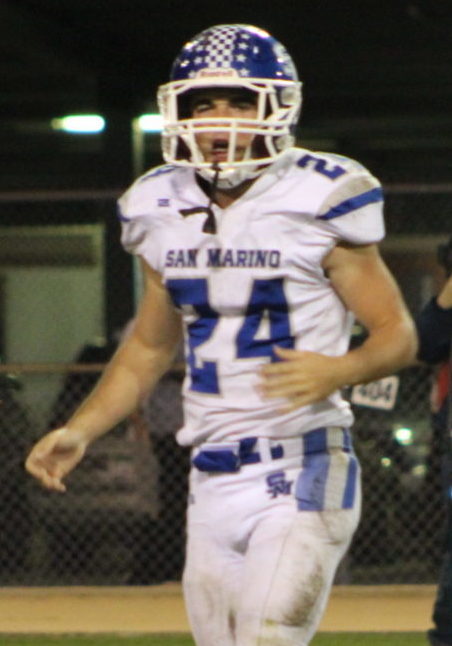 Beau Hobbie ran for 204 yards and 4 TDs to lead the Titans.

Hobbie piled up 160 yards and all four scores on 12 carries in the first half and had just three carries in the second half. San Marino led 49-14 at the half and after the Titans scored two quick touchdowns early in the third quarter the game became a running clock when both coaches agreed.

San Marino scored on its first two possessions. The Titans needed just four plays (all Hobbie runs) to go 58 yards on their first series as Hobbie finished it with a 12-yard run. After a Temple City punt, San Marino went 80 yards in three plays. Kade Wentz, in his first game back after sitting out six weeks with a shoulder injury, hit Sean Richardson for a 60-yard touchdown to  make it 14-0.

Temple City tried a little trickery on the next series when they faked a punt on fourth down. But an attempted pass turned into a 40-yard interception return by Neven Yarahmadi and just like that it was 21-0 in the first quarter.

The Rams got on the board just before halftime when Samuel Jackimowicz capped a 13-play, 76 yard drive with a seven-yard touchdown run.

San Marino answered with 29-yard TD strike from Wentz to Jacob Leftwich and after a blocked punt gave the Titans the ball on the TC 32, Hobbie took it 32 yards to the house on the first play to give San Marino a 35-7 advantage.

Temple City’s biggest play of the night came on the following series when Alex Vera hit Daniel Centeno over the middle for a 26-yard touchdown. Centeno wrestled the ball away from the San Marino defender in the end zone for six with 5:36 left in the first half.

That just seemed to make the Titans mad. They marched 45 yards on three plays as Hobbie finished it from seven yards out. On the next possession, San Marino drove 70 yards on five plays as Hobbie did the honors again for a three-yard score for the 49-14 lead at the break.

An 11-yard touchdown sprint by Wentz, a Temple City fumble, and a 32-yard keeper for a score by backup quarterback Connor Short led to a running clock mid-way through the third quarter.

Matthew Karapetyan raced in for a 19-yard score as the clock hit 13 seconds and then ran out for the final tally of the night.

Wentz completed 6 of 7 for 153 yards and two touchdowns to balance out the attack for San Marino.

For Temple City Jackimowicz was the workhorse with 25 carries for 102 yards and a score.

San Marino remained unbeaten in the Rio Hondo with the victory at 3-0 and 7-1-1 overall. It sets up a showdown with Monrovia next week for the league title. Temple City fell to 1-2 in the Rio and 3-5 overall.

14 Comments to "Winning is a Hobbie for San Marino"