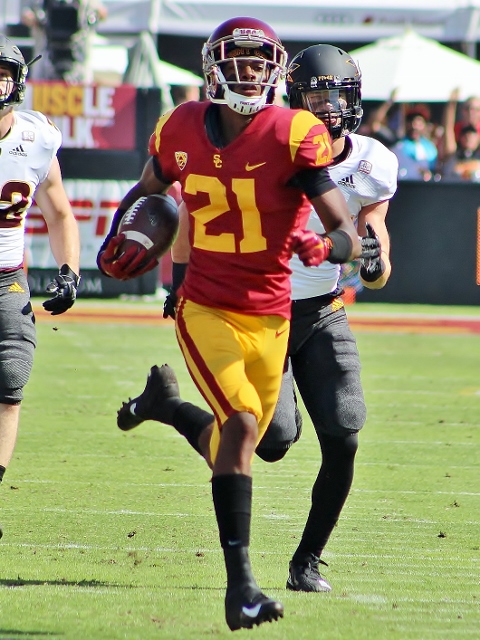 (Los Angeles) – USC fell behind early, rallied in the second half but ultimately fell to Arizona State 38-35 Saturday before 47,406 at LA Memorial Coliseum.

The Trojans rallied from a 17 point deficit to take a 28-24 lead early in the third quarter, but a big punt return later in the third put the Sun Devils back on top and USC could never recover. The Trojans started third string quarterback Jack Sears, after both J.T. Daniels and Matt Fink were sidelined by injuries. Sears looked good overall completing 20 0f 28 for 235 yards and two touchdowns but it wasn’t enough to get the win.

The Trojans got on the board first when Tyler Vaughns returned a punt 82 yards to give USC a early 7-0 lead, but Arizona State responded with an eight-play, 75-yard drive to get even. Manny Wilkins hit N’Keal Harry for a 45-yard score with 8:55 left in the first quarter.

On the next series the Trojans fumbled deep in their own end giving Arizona State a first down at the USC three. From there Eno Benjamin scored for a 14-7 Sun Devils lead.

Early in the second quarter Brandon Ruiz booted a 31-yard field goal to cap a 74-yard drive to give Arizona State a 17-7 advantage. 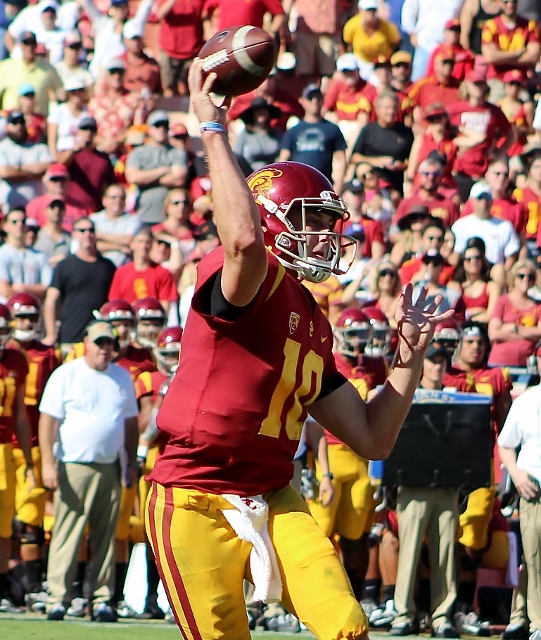 Later in the quarter, the Sun Devils drove 95 yards on 12 plays with Benjamin getting his second score of the day on a 49-yard touchdown jaunt right through the heart of the USC defense with 6:12 left in the first half and suddenly USC was looking down the barrel of a 24-7 deficit.

The Trojans put together their first scoring drive of the day driving 75 yards on eight plays. Sears threw his first touchdown pass of his USC career hitting Michael Pittman on a six-yard strike with 13 seconds left in the half. The Trojans cut the ASU lead to 24-14 going into the break.

Benjamin had 125 yards and two touchdowns rushing for the Sun Devils at the half and Wilkins threw for 120 and a score. USC had just 51 yards on the ground, 45 by Aca’Cedric Ware and 64 yards passing.

USC opened the third quarter with a nine-play, 87-yard drive that Velus Jones finished with a seven-yard TD run. The Trojans were aided by a face masking penalty that put the ball at the ASU seven yard line. 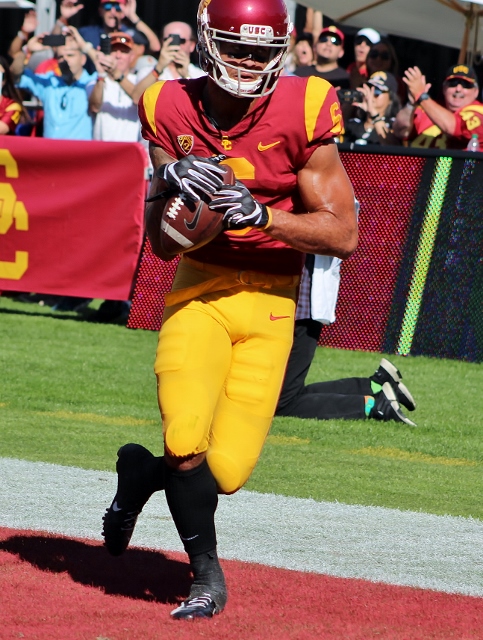 On ASU’s next possession Wilkins was hit by Iman “Biggie” Marshall, the ball popped loose and Jonathan Lockett fell on it at the Arizona State 26. The Trojans immediately took advantage of the turnover when on the first play Clay Helton reached into his bag of tricks and pulled out a double pass. Sears hit Vaughns who then threw a strike to Pittman in the end zone who fought off a defender and pulled it in for 26-yard touchdown. with 10:24 left in the third the Trojans had regained the lead at 28-24 and all seemed right with the cardinal and gold.

However later in the third the Trojans were forced to punt and Harry fielded the ball at the eight yard line, beat the USC coverage to the corner and returned it 92 yards for a touchdown. It appeared Harry may have stepped out of bounds but after a review of the play it was touchdown Sun Devils and it was 31-28 with 2:54 left.

It stayed that way until late in the fourth quarter. With just over four minutes left Helton elected to punt from the Trojans 25 on fourth and three instead of going for it. ASU took full advantage as Wilkins got loose on a keeper and raced 45 yards for the score with 1:23 left to effectively ice it.

USC did manage one more score when Sears connected with Vaughns in the endzone for a 48-yard touchdown with 48 seconds left. The Trojans then attempted an onside kick that was recovered by Arizona State.

Vaughns was Sears’ favorite target finishing with four catches for 72 yards and a score. He also threw a touchdown pass and had the punt return for a score. For the Sun Devils Benjamin had 185 yards and two touchdowns on 29 carries. Wilkins threw for 166 and a TD and rushed for 89 yards and a score.

(628)
$20.25 (as of n/a - More infoProduct prices and availability are accurate as of the date/time indicated and are subject to change. Any price and availability information displayed on [relevant Amazon Site(s), as applicable] at the time of purchase will apply to the purchase of this product.)

(110297)
$19.99 (as of n/a - More infoProduct prices and availability are accurate as of the date/time indicated and are subject to change. Any price and availability information displayed on [relevant Amazon Site(s), as applicable] at the time of purchase will apply to the purchase of this product.)

(96218)
$64.99 (as of n/a - More infoProduct prices and availability are accurate as of the date/time indicated and are subject to change. Any price and availability information displayed on [relevant Amazon Site(s), as applicable] at the time of purchase will apply to the purchase of this product.)
Posted in College | Tagged Arizona State Football, LA Memorial Coliseum, Pac-12, USC Football