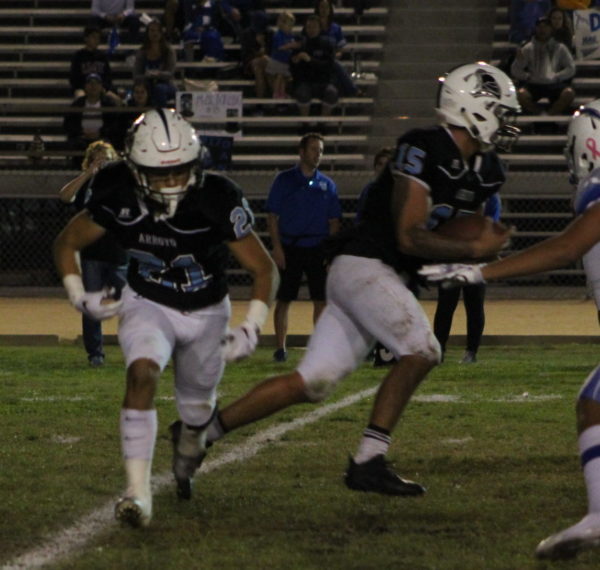 Ernesto Camacho (15) and Adrian Cavillo (21) made big plays for the Knights but it wasn’t enough.

(El Monte) – Ernesto Camacho’s pass sailed just high through the receivers’ hands in the endzone on the two point conversion and Arroyo fell to Temescal Canyon 31-30 in overtime Friday night in the first round of the CIF Division 8 playoffs.

The play was reminiscent of the two point play the Knights used to beat Rancho Mirage in the Championship game two years ago. They ran the same play with Camacho rolling to his right and it appeared he had Josh Hernandez open in the corner but they couldn’t connect and the pass fell incomplete.

Temescal scored first in overtime on a one-yard run by Brandon Clemons to go up 31-24. The Knights immediately answered on the first play when Camacho hit Jared Hernandez in stride on a 25-yard TD pass. Arroyo head coach Jim Singiser wasted no time in the decision to go for two. It appeared to be the perfect call but this time  it didn’t work out.

Arroyo fell behind 10-0 early in the second quarter when Jaden Gamez scored on a one-yard run to cap a short 30-yard drive. Daniel Gutierrez booted a 31-yard field goal for the Titans in the first quarter to draw first blood.

Arroyo got started later in the second when they needed just four plays to go 66 yards. Camacho hit Jared Hernandez for a ten-yard touchdown strike.

Temescal Canyon went up 17-7 on the next series with a nine-play, 74-yard march. Clemons powered his way in from the one.

Camacho used his legs to get the Knights even. He scored on a seven-yard run to finish a 57-yard drive with 7:45 left in the third quarter.

The Knights took their first lead of the game in the fourth quarter on a 45-yard touchdown sprint by Adrian Calvillo.

It stayed that way until late in the fourth when Temescal Canyon pieced together a 37-yard drive off a short field. Clemons bulled in from the two-yard with 1:11 left in regulation to tie it. The drive was not without controversy however as it appeared Arroyo had recovered a fumble on the previous play when the Knights emerged from the pile with the ball, but the officials ruled that the runner was down.

“I never did get an explanation as to why we didn’t get the fumble. No whistle blew and the refs admitted that we came away with the ball, but it is what it is,” said Arroyo head coach Jim Singiser.

The Knights had an golden opportunity to avoid OT and win in regulation. After the Titans tied at 24, Arroyo drove down to the Temescal Canyon ten-yard line and set up a field goal with four seconds left. However Piza’s potential game winning 27-yard boot sailed wide right and it was on to overtime.

The Knights finished the season 7-3 overall while Temescal Canyon improved to 6-5 overall and advanced to the second round to play Arcadia.

“I couldn’t be more proud of our coaches and kids. I think we showed that we can play in this division,” Singiser added.

7 Comments to "Knights a Buck Short in Overtime"