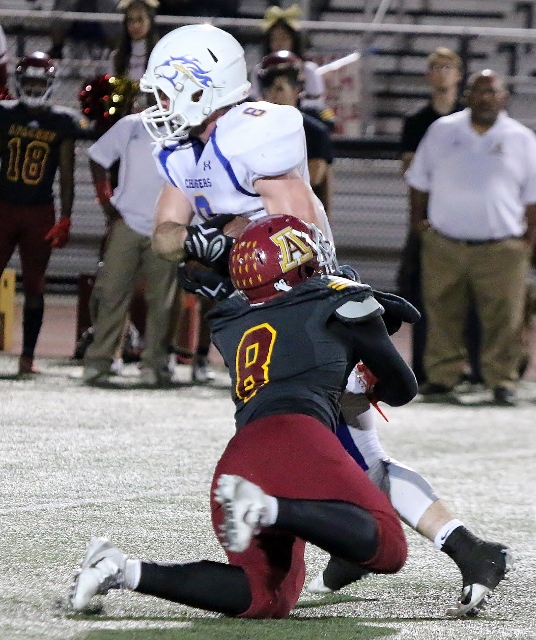 (Arcadia) The Arcadia Apaches opened the first round of the CIF Division VIII football playoffs against the Agoura Chargers and cruised to a 56-7 win Friday night at Salter Stadium.

Rolandiss Whitener got things going early for the Apaches. Whitener fielded the opening kick off and returned it 46-yards to the Agoura 40. Whitener got the call on the third play from scrimmage and cruised around the left end for the score. Christian Reyes added the extra point and before the seats were warm the Apaches had a 7-0 lead.

Arcadia scored two more times in first quarter on passes from Dylan Guerra to Dylan Wright of four and 66-yards. 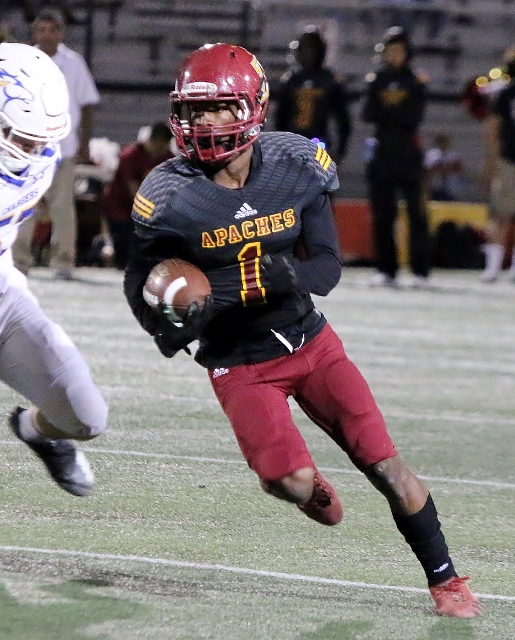 Two big scores for Rolandiss Whitener in the Apache win.

Down 21-0, the Chargers finally got on the board with time running out in the first. Ben Tene scored on a one yard run to cap a seven play 80-yard drive.

The Apaches extended their lead back to 21 points early in the second on a 23 yard pass from Guerra to Whitener. The drive was set up by Demarco Morrer who returned the Agoura kick off to the Charger 38. Arcadia needed only four plays to cover the 38 yards.

Arcadia’s defense got into the scoring mix when Deonte Bevel picked off a Toby McClure pass and returned it 23-yards to paydirt.

Down 35-7 and Agoura needing to shake up the momentum, decided to go for it on fourth and one on their own 29. They didn’t make the line to gain and turned the ball over on downs.

The Apaches took full advantage of the great field position and needed only one play to cover the 29 yards. Guerra found Wright again on the post pattern for the score.

Arcadia scored two more times to close out the third quarter on a 50 yard interception return by Ahmad Lipscomb and a one yard run by Chalchise Chaffe.

Up 56-7 and with a running clock, Arcadia head coach Andrew Policky emptied his bench for the fourth quarter. Agoura also took the one-sided game to get as many non-starting seniors some playing time in their final game.

The Apaches will now go on the road next Friday to Temescal Canyon to take on the Titans who got by Arroyo 31-30 in overtime.