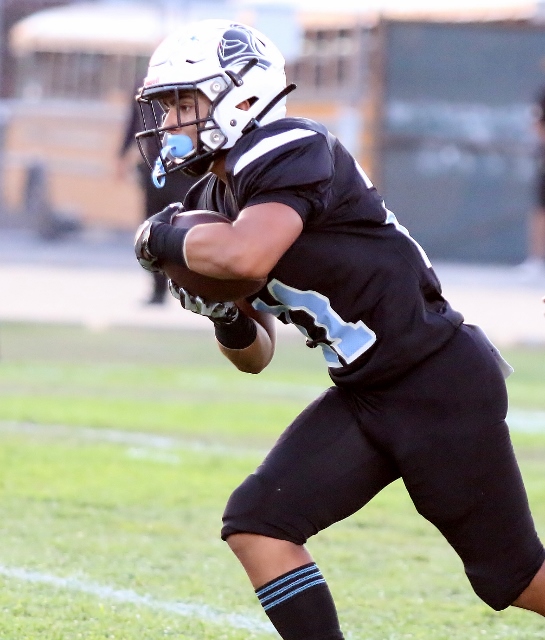 Adrian Calvillo leads the way for the Knights!

(El Monte) – The Arroyo Knights clashed with the Schurr Spartans Friday night at B.L. Bergstrom Stadium and came away with a 42-27 victory led by a big night from Adrian Calvillo.

Calvillo amassed 180 yards on the ground and another 39 through the air with three scores to help push Arroyo’s record to 2-1.

Although Calvillo had a stellar night, it was the Knight defense that got Arroyo on the board first. Josh Arevalo stepped in front of and intercepted a Jesse Preciado pass and outraced the Spartans to paydirt. Ramiro Piza added the extra point for the 7-0 lead.

The Spartans fought back  and capped a 13 play, 63-yard drive with a field goal to cut the lead to 7-3 with just :09 left in the opening frame on a 34 yard field goal by Christian Hernandez. Hernandez would also drill a 24 yarder later in the game.

The Knights countered with a scoring drive of their own going 75 yards on 13 plays with Calvillo getting his first touchdown of the evening from 3-yards away.

Isaiah Candelaria had a huge night for the Spartans.

Just a few minutes later Arroyo pushed their advantage to 21-3 on a another Calvillo run – this time from 22 yards out. Only two plays were needed to cover 46 yards after a short Spartan punt put them in good field position.

Schurr got their first touchdown of the evening with just :25 seconds left in in the first half. Preciado found Ray Whitney in the endzone from 19 yards away.

After another Calvillo touchdown extended the Knight advantage to 28-10, the Arroyo defense got their second score of the night on a 18 interception return by Dylan Leonardis.

The Spartans kept competing and went on a 6-play, 71 yard drive highlighted by a 36-yard touchdown run from Isaiah Candelaria. Candelaria shined for the Spartans gaining 234 yards on 27 carries. Included in those 234 yards was an 82-yard run.

Schurr added a late touchdown with 2:28 remaining in the game with Preciado connected with Whitney for the second time in the game.

In the battle of young quarterbacks, Enriquez finished the night connecting on 17 of 27 passes for 212 yards and a score while Preciado completed 12 of 31 for 159 yards and two touchdowns to go along with two pick sixes.

The Knights have a bye next week will go on the road in two weeks to take on Rio Hondo Prep while Schurr will return home to take on Rosemead next Friday night.

14 Comments to "Knights Victorious in Battle with Spartans"