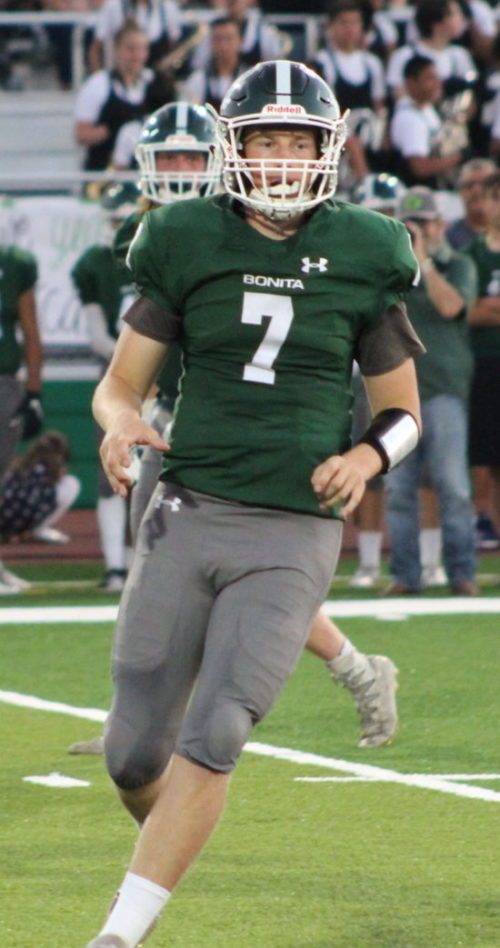 Quarterback Sean Jastrab and the Bonita Bearcats face San Dimas in the Smudgepot.

The Vikings are on roll. So far they are living up to the preseason hype. Don Lugo hasn’t gotten off to the start it hoped for but the Conquistadores schedule isn’t exactly a walk in the park. This game won’t be any easier. Northview has too much.

There’s been a lot of talk recently about this one as Sierra Vista is trying get back on the radar under new co head coaches Sergio Villasenor and son Matt Villasenor. The Dons have two players, defensive lineman Nick Dimitris and offensive lineman Anthony Rosas who are receiving Division 1 offers from such schools as Auburn, Oregon and Florida. Rosas is already on the field and Dimitris is expected to play Friday night. The Dons weren’t overly impressive in the first week however with a one point win over Gabrielino but they did rout Ganesha last week. Baldwin Park was blanked last week by Western after two early season victories. Should be a close one as neither team at this point is dominant. Sierra Vista emerges with City bragging rights.

This once great rivalry has lost some of its luster. West Covina has been down the last few years and Covina, although they did get a big win last week, is still finding its way under new head coach Dale Ziola. The Colts won big last year and not that much has changed. The Bulldogs might hang around for awhile but in the end Covina prevails. At this point they’re just better.

This should be the first real test for El Monte. San Marino made it close until Davon Booth took over late. Orange Vista has won two of its first three and its only loss was by   just two scores to Burbank. The Lions held off Orange Vista by six last season. They should be able to hang on again. El Monte wins but it will be a dog fight or in this case a Lion-Coyote fight.

El Rancho is coming off a huge comeback victory over Garfield and has bounced back with two wins after a tough opening night loss to Northview. Montebello, still on a death march that would make even Clay Helton cringe, has fallen in is first three games. This is another battle for the Oilers, one in which they will come up short in again. The Dons look special this year. The Oilers may not get well until league play. Dons go to 3-1.

Los Altos looked good last week in a win over Monrovia. So did Glendora in a rout of Charter Oak. Los Altos has looked good all year going undefeated. So has Glendora who is also unbeaten. Los Altos is good. Glendora is better. Good test for the Conquerors but the Tartans are little bigger, stronger, faster. Glendora goes to 4-0.

La Serna looks like well…La Serna. The Lancers have started off winning their first three games and again are the favorite in the Del Rio. They have absolutely shellacked their first three opponents racking up 147 points in the process. Colony, usually a power, is having a down year. Last week the Titans lost 42-0 to Citrus Valley. This one might not be close. La Serna gets the jump early and never looks back. Lancers big.

The Smudgepot is always a great area matchup, a great atmosphere and usually good competition between two solid teams. San Dimas is looking to bounce back after a loss to Whittier last week while the Bearcats have routed their first three opponents outscoring them 131-7 with two shutouts. It should be a good one. The Smudge Pot always is. But this year Bonita has too much. Steve Bogan and company remain undefeated.