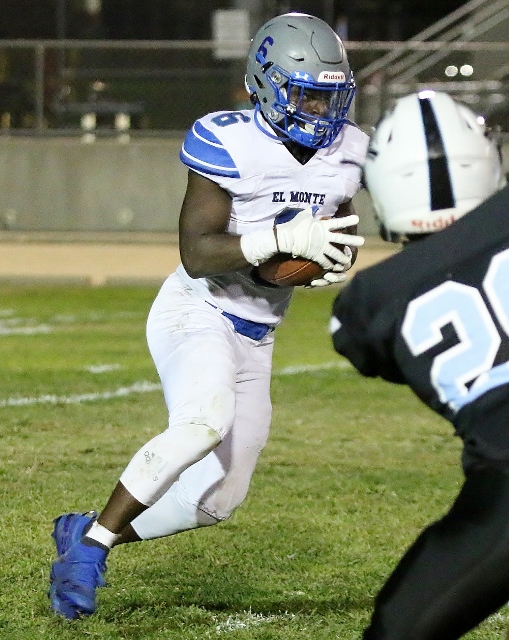 (El Monte) In a game that could very well decide who wears the crown in the Mission Valley League, the El Monte Lions and the Arroyo Knights battled for four quarters with the Lions coming out on top 26-21 at B.L Bergstrom Stadium Friday night.

The Lions’ Davon Booth and Abel Cueva combined for 349 yards and two touchdowns. Booth rushing for 210-yards on 26 carries with two scores and Cueva grinding out 139-yards on 15 carries.

El Monte got on the board first with 7:38 left in the first quarter. The Lions were set up in great field position at the Arroyo 26 when Jonathan Lopez blocked a Knight punt and recovered it at the 26. Two plays later Jose De Jesus Garcia plunged his way across the goal line from 2-yards away. The two-point conversion failed but the Lions had a 6-0 lead.

The Lions jumped out to a 12-0 lead on Booth’s first score of the night finishing off a 5-play 68 yard drive. Included in the drive were a 48-yard scamper by Booth combined with a 28-yard scoot to paydirt. 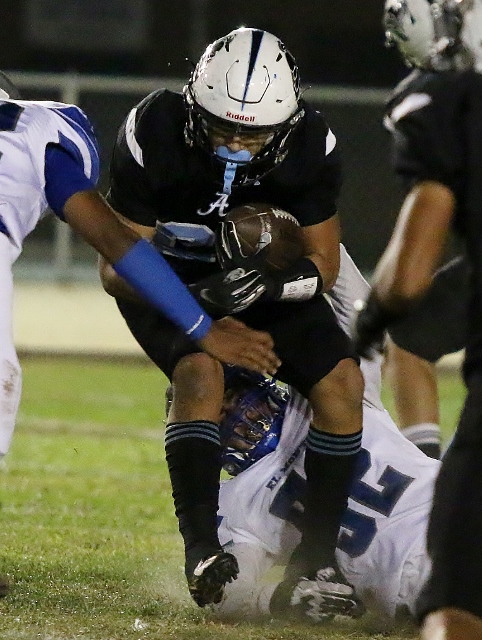 Adrian Calvillo was the majority of the Knight offense.

The Knights came back to cut the lead to 12-7 on a 1-yard run by Adrian Calvillo. Calvillos score was the culmination of a 15-play 74 yard drive.

Arroyo had a chance to cut the lead to two late in first half. A 6-play drive stalled at the El Monte 15. Ramiro Piza trotted out for the 32-yard field goal attempt. His boot was no good as it just sailed outside the near goal post.

El Monte regained a 13-point advantage with a little over four minutes left in the third quarter. The Lions went on a drive that ate up yardage and the clock going 79-yards on 16 plays. Lion quarterback Joseph Herrera called his own number from a yard out. The Lions got the 2-point conversion this time with Booth getting the carry.

Down 20-7, Arroyo got a spark on a kick return that Noel Acosta returned deep into Lion territory to the El Monte 30. Nine plays later Calvillo got his second touchdown of the night. Calvillo was the workhorse for the Knights carrying the rock 31 times for 149-yards the the two scores. 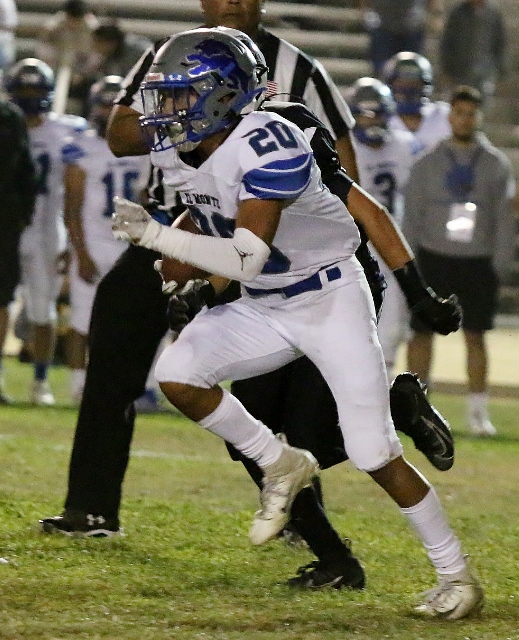 Abel Cueva also made his mark on the game.

The Lions answered the Arroyo score with one of their own with 7:19 left in the final frame. A 12-play drive was capped by Booth’s second touchdown run this time of one yard.

Arroyo again answered with 8-play scoring drive that covered 63-yards. Joshua Tustin took the ball swept right and worked his way into the endzone. Piza added the extra point and with 4:45 the Knights trailed 26-21.

Arroyo chose to kick the ball deep and out of the endzone and keep the ball out of Booth’s hands and looked to make a stop and get the ball back. The plan didn’t work out though as the Lions ground up the clock and enough first downs to put the game away.

Arroyo will be back at home next week to take on South El Monte while El Monte will travel south to take on Mt. View.