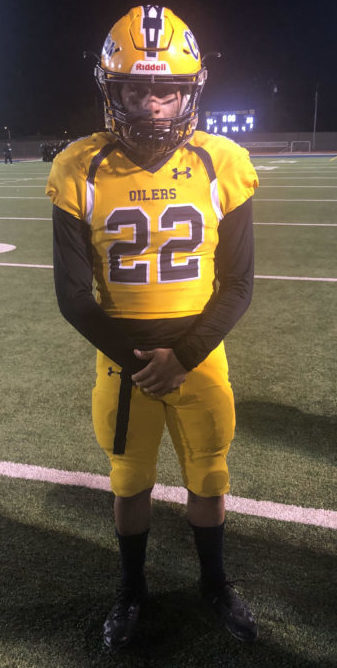 [Montebello] Lalo Gonzalez scored four of his five touchdowns in the second half leading the Oilers to a 56-20 victory over rival Schurr at Montebello high school Friday night.

The game started off with a fumble by Gonzalez and interception thrown by quarterback Andre Maldonado on Montebello’s first two possessions.

The Oilers stood poised and took control scoring two touchdowns late in the first quarter when Maldonado found Elijah Martinez both times in the end zone taking a 14-0 lead to the second quarter.

Schurr got on the board midway through the second quarter when Marcus Gonzales broke the plane for a three yard touchdown run.

Montebello came right back pounding the ball down the field with Gonzalez finishing it off with a five yard touchdown for his first of the night.

The Spartans answered with a Jesse Preciado nine yard touchdown pass to Nathaniel Palacios with under a minute remaining in the first half.

The Oilers drove 60-yards in 48-seconds and it was capped of by a Maldonado nine-yard touchdown scamper making it 28-14 at the half.

In the second half Gonzalez took control scoring on runs of 3, 94, 25 and 31 yards putting the game out of reach of the Spartans.

Schurr did get on the board the second half when Preciado hit Palacios again for a 59-yard trip to paydirt.

Gonzalez finished with 23-carries for 377-yards and his five scores. Martinez had three receptions for 74-yards, two scores and two interceptions one being a 100-yard return for a touchdown that was called back on a holding call. Jordan Dunkins also had a interception for the Oilers.

Preciado ended the night going 12 of 24 for 194-yards two touchdowns and three interceptions. Isaiah Candelaria was the workhorse for the Spartans with 19-carries for 73 yards.

Montebello (2-6) will host Mark Keppel next week and Schurr (3-5) travels to San Gabriel.