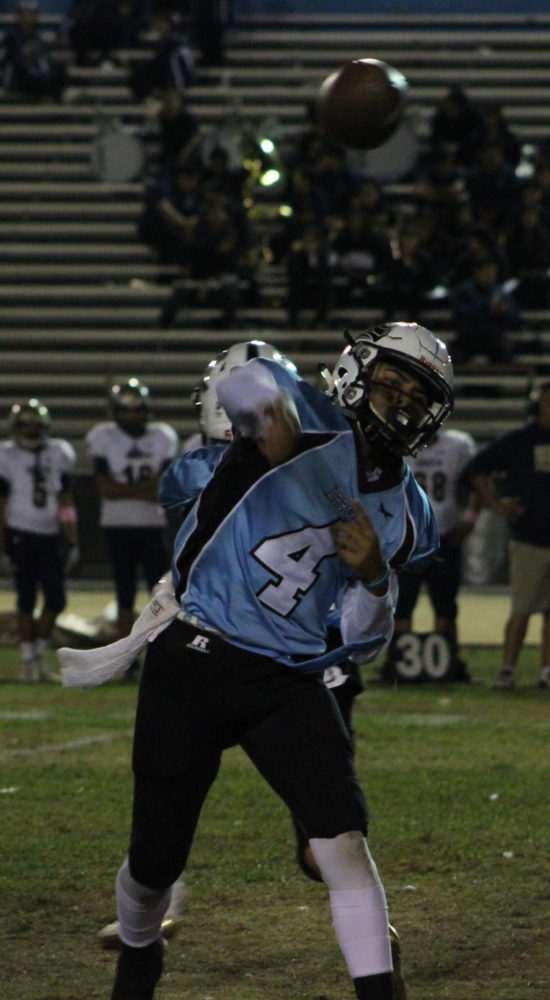 Andrew Enriquez threw for over 200 yards and three touchdowns for the Knights.

The three headed monster for the Knights piled up a ton of stats. Enriquez completed 18 of 26 for 221 yards to go along with the three scores. Enriquez also ran for 40 yards on 5 carries. Hernandez caught 6 passes for 148 yards to go with his 3 and Calvillo had 23 carries for 166 yards.

Arroyo was up 28-3 at the half and cruised the rest of the way. South El Monte did manage a couple of touchdowns in the second half. Calvillo scored on a two-yard run to cap a 72-yard drive on Arroyo’s first possession. The Eagles countered with a 27-yard field goal by Ryan Giordano late in the first quarter.

The Knights broke it open in the second quarter courtesy of the Enriquez-Hernandez connection. First Enriquez hit Hernandez in stride for a 59-yard strike to make it 14-3. On the next possession, Enriquez found Hernandez again on the third play for a 41-yard score.

When Calvillo got his second of the night on a two-yard blast with 2:18 left in the quarter Arroyo was cruising 28-3.

The Knights extended the lead 35-3 early in the third quarter when Calvillo got TD number three with an 11-yard walk in to finish a 72-yard march.

South El Monte scored once in the third quarter and once more in the fourth. Mario Zamudio hit Christopher Tirado for 41 yards down to the one-yard-line and then hit the endzone himself on a one yard keeper late in the third.

Hernandez did his thing again as the clock wound down on THE third quarter hauling in a 19-yard TD pass from Enriquez.

Zamudio scored on another one-yard plunge in the fourth to count for the final tally.

“Every win is a must win. We’re not worried about that,” said Arroyo head coach Jim Singiser when asked if the Knights especially needed this one “But I was proud of the way we bounced back tonight after last week.”

9 Comments to "Arroyo Gets Offensive in Rout of South"