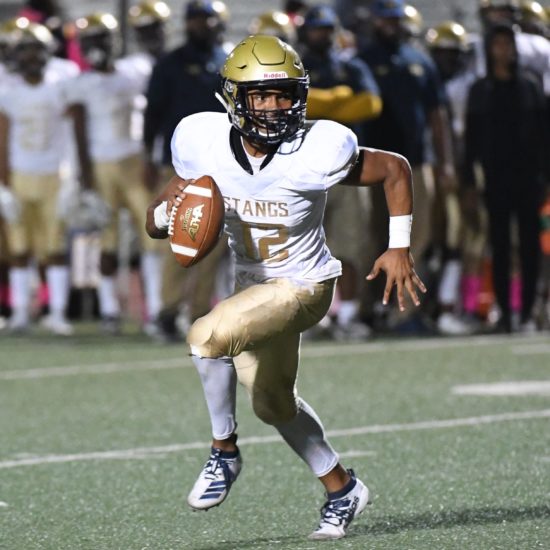 Amaris Harrison leads Muir into the Turkey Tussle with Pasadena Thursday night at the Rose Bowl. (Photo by Doug Brown).

All Kickoffs are at 7:00 p.m. unless otherwise indicated

Pacific
Pasadena (6-2) vs. Muir (7-2) (Rose Bowl)
Last Year: Muir 33-14
The Turkey Tussle is a little more meaningful this year as each team is vying to improve its playoff chances. Muir is 4-1 in the Pacific League while Pasadena is 3-2 and tied with Burbank for third. A loss coupled with a Burbank win could knock the Bulldogs out of playoff contention. The Mustangs need a win to secure their second place spot. Pasadena is an improved team. They have raised a few eyebrows this year, but the Stangs are just too talented. Pasadena won’t be able to hang for 48 minutes. Muir wins in the Rose Bowl.
Muir 34 Pasadena 13

Mission Valley
El Monte (9-0) at South El Monte (4-5)
Last Year: El Monte 53-7
South El Monte, locked in a four-way tie in the MVL for second place needs a win to secure a playoff spot. El Monte is looking for a perfect season. With the Eagles it’s hard to know which team is going to show up. Will it be the team that Arroyo beat 42-17 or the team that routed Rosemead 51-28? South also lost to Gabrielino in the first league game. They would need a near perfect game to beat El Monte and based on their inconsistency that won’t happen. Lions end the regular season 10-0.
El Monte 42 South El Monte 21

Almont
Bell Gardens (3-6) at Schurr (4-5)
Last Year: Bell Gardens 45-7
Both teams are 2-2 in the Almont. A win could mean a third place finish and a playoff berth. Schurr has had trouble stopping people all year. Bell Gardens isn’t where it would like to be but the Lancers have played well on occasion. They were up on undefeated Alhambra before eventually losing by nine points last week. Schurr gave up 69 points to Alhambra while BG allowed just 23. Bell Gardens should make enough stops to get it done. The Spartans give up too many points.
Bell Gardens 31 Schurr 17

Angelus
Cathedral (5-4) at St. Francis (7-2)
Last Year: Cathedral 31-17
Best game of the week will be at St. Francis. Always a great battle between two heavyweights. Cathedral is at the top of the Mission League but St. Francis can overtake the Phantoms with a victory. Both teams can score, play defense and has athletes all over the field. Will come down to who makes a play in the fourth quarter. Cathedral holds on and wins by a field goal.
Cathedral 27 St. Francis 24

Del Rio
Santa Fe (3-6) at El Rancho (7-2)
Last Year: El Rancho 52-14
This game is important to Santa Fe because a win would put the Chiefs into a tie with El Rancho for second place in the Del Rio. Santa Fe shocked Whittier 2-0 last week to get in this position. But El Rancho has had a great year. The Dons only losses have come against undefeated La Serna and 7-2 Northview. They aren’t about to stumble in this one and let the Chiefs throw a monkey wrench into their plans. Santa Fe might hang around for a quarter but after that it’s all ER. Dons roll and gain some momentum heading into post season.
El Rancho 35 Santa Fe 7.

Hacienda
Los Altos (7-2) at South Hills (5-4) (Covina District Field)
Last Year: South Hills 49-14
The winner here will secure the second place spot in the Hacienda League. Diamond Ranch looks good for first with only West Covina left in its path. A second place finish would not only secure a playoff spot but possibly a home game as well. Los Altos has just two losses to D Ranch and Glendora while South Hills has stumbled four times. The Conquerors are still smarting from the beating the Huskies gave them last year. They might be looking for a little pay back. This team has the moxie to do it. Los Altos
takes second in league.
Los Altos 24 South Hills 14

San Gabriel Valley
Downey (4-5) at Warren (6-3)
Last Year: Warren 48-28
Paramount will take care of Gahr Friday night. That we know about the San Gabriel Valley League. What we don’t know is who will finish second. Warren-Downey is one of the best rivalries in Southern California high school football and this year will be even more intense with both teams coming into the game tied for second in the SGV at 3-1. Like the Cathedral-St. Francis battle this should go down to the wire. Who makes the big stop? Who makes the big play on offense. Hard one to call. Downey has just enough.
Downey 35 Warren 31