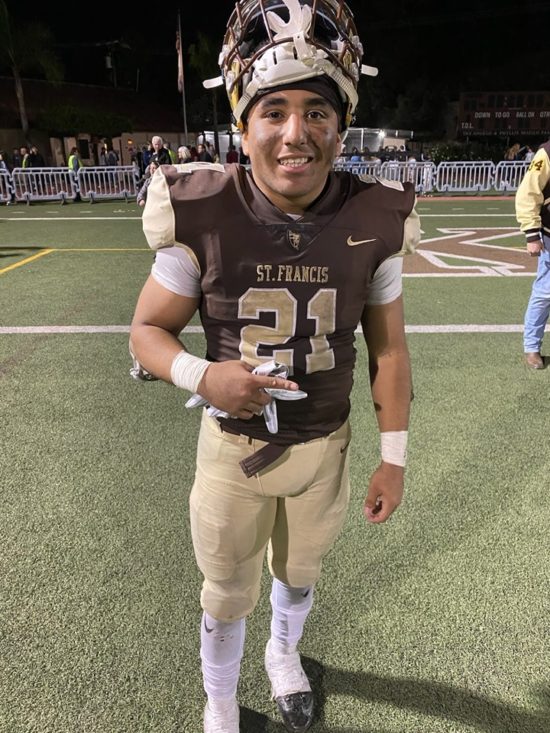 “Offense …can’t say enough about Kevin Armstead,” said St. Francis HC Jim Bonds. “But those guys up front, they did an unbelievable job blocking those guys. That is a very talented defense over there.”

With a playoff spot on the line for the Golden Knights, Armstead and Co. knew they needed to win to secure a place in the postseason.

Getting right to business, St. Franks opened the game by marching down the field to have Jack Clougherty start the scoring by connecting with Bryson Reeves alone in the corner of the end zone for six.

Two possessions later, Armstead took over the drive when he was on the receiving end of a screen pass that chewed up 34 yards. Two plays later, he broke the plane for his second touchdown of the night with 10:55 left in the second quarter.

Then with 1:20 remaining in the first half, St. Francis added 10 more points before the teams went in for intermission. On a fourth and short, Armstead leaped into the endzone, and Jake Smith booted a 28-yard field goal to push the score to 24-0 at the break.

Following the break, the gameplan of ground and pound continued for the Golden Knights. Armstead added his third and fourth rushing scores of the night, extending the lead to 38-0.

“All the credit goes to the line. Without them I would have not gotten those yards, none of those touchdowns,” said Armstead after the game. “We came out and played Golden Knight football, you see on the scoreboard. We played four quarters hard. We came out and showed up.”

With the regular season finished, both teams will await their fate to see where they land in the postseason when CIF releases their playoff bracket this Sunday.

3 Comments to "In Armstead They Trust"