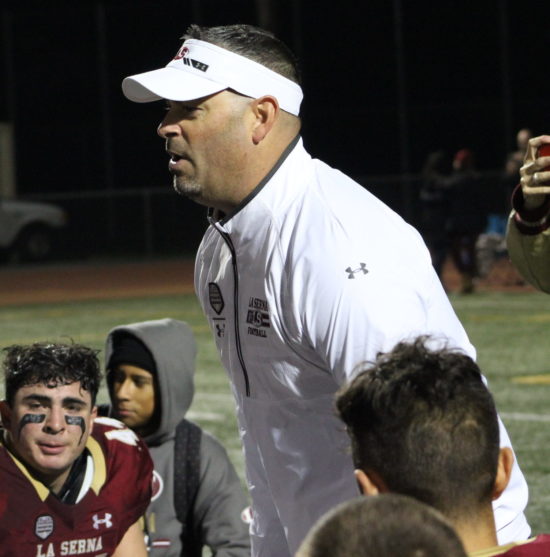 DIV 5
Aquinas (11-2) at St. Paul (11-2)
St. Paul looks better every week. The Swordsmen’s 14-10 win over Culver City on the road was impressive. If you want a shootout St. Paul can do that. If you want a slugfest the Swordsmen proved their up to that as well. Aquinas needed a field goal to beat a solid Glendora team. Again it’s a game that won’t be decided until the fourth quarter. Aquinas gives St. Paul all it can handle but the Swordsmen get it done.
St. Paul 28 Aquinas 21

DIV 10
Crescenta Valley (13-0) at Simi Valley (10-3)
The Falcons are trying to relive the memories of 2014 when they ran the table with a perfect 14-0 record that culminated with a 21-14 win over Downey in the CIF Championship game. There are similarities. Crescenta Valley again has an explosive offense and a defense that makes the stops when necessary. Simi Valley lost its first two games but has won 10 of 11 since. The question is can the Simi Valley defense make enough stops to win? The answer is no. CV simply has too much firepower. Falcons go unbeaten.
Crescenta Valley 35 Simi Valley 24

DIV 11
Muir (11-2) at Marina (11-2)
The Mustangs may not be the best team in the Pacific League but they are looking to become the best team in Division 11. They proved their mettle last week with a tough road win over Linfield Christian. Their only losses have been to an undefeated Crescenta Valley team and Grace Brethren who is 12-1 and in the Division 3 Finals. Marina won the Big 4 League but Vikings schedule doesn’t stack up with Muir’s. They have the advantage of being at home but it’s nothing the Stangs can’t overcome. Muir brings home the title.
Muir 27 Marina 17

DIV 6
Pacifica/Oxnard (12-1) at La Serna (13-0)
La Serna had to slug it out last week in a 14-7 win over San Jacinto. The Lancers defense has been stout all year long. Offensively they not only have Chandler McCaffer to grind out the tough yards but Steven Pinales to outrun the secondary. Pacifica/Oxnard has lost only once all year and is averaging over 50 points per game. But the Tritons haven’t faced a defense quite like La Serna’s before. It won’t be a shootout but it won’t be 14-7 either. Both teams will make plays. The Lancers make one more.
La Serna 34 Pacifica/Oxnard 31