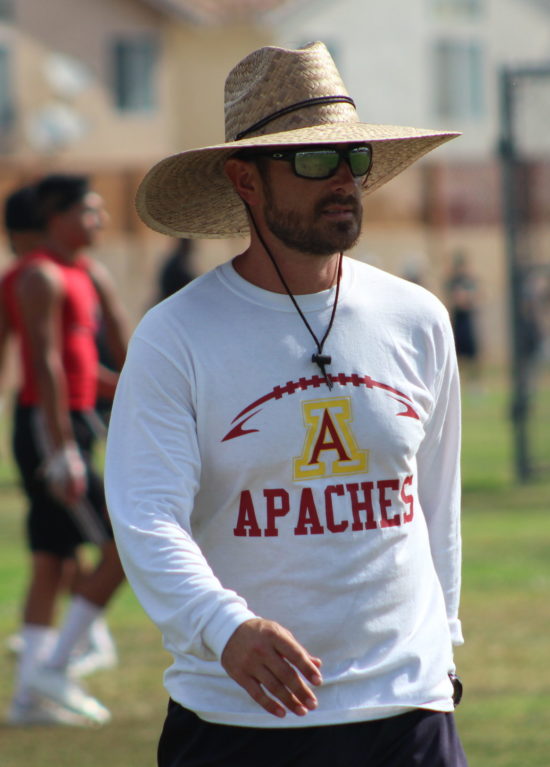 Andrew Policky has stepped down as the head coach at Arcadia.

By Tim Peterson
(Arcadia) – Andrew Policky has stepped down as the head football coach at Arcadia he confirmed Wednesday. The Apaches best year under Policky was in 2018 when they won the Pacific League and went 11-3 overall advancing all the way to the CIF Division 8 Finals before losing to Kaiser 38-35. This past season Arcadia finished 4-6 and missed the playoffs.

During Policky’s six-year run Arcadia was 39-29 overall and 5-3 in the post season. Policky took over for Chris Long in 2014 and the Apaches struggled the first year going 2-8. Arcadia went 5-5 the next season but reached the playoffs in 2016 advancing to the second round where it fell to Quartz Hill 22-21.

The Apaches took second place in the Pacific League in 2017 and again went to the second round where they lost to Katella 41-35 in overtime. Then Policky led them to the Finals in 2018.

Policky cited the need to spend more time with his family as the main reason for stepping down. “Time is a big part of it. Arcadia is a great place to be but you have to start and assess whether a stipend is worth the time away from your family,” Policky said. “Right now I’ve decided it’s not. I’m definitely going to try and enjoy the time with my wife and kids.”

Arcadia will begin the search for a new head coach immediately.