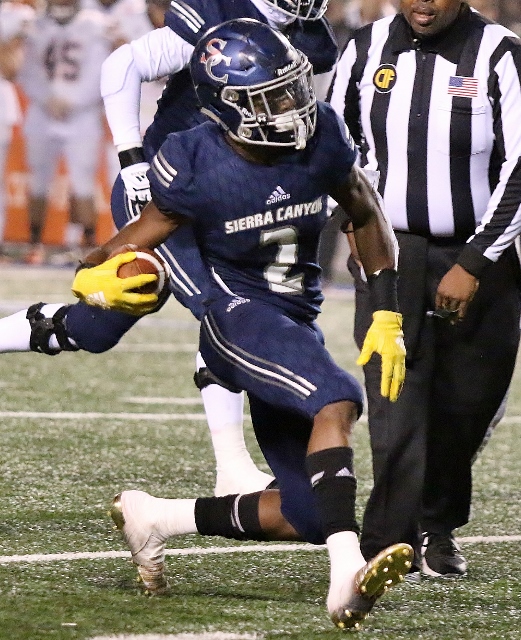 JD Sumlin had a 72-yard touchdown run to get Sierra Canyon close in the third quarter. (Photo by Duane Barker).

By Tim Peterson
(Norwalk) – Sierra Canyon won the CIF title but came up short in State as they fell to Central (Fresno) 34-19 Friday night in the Division 1-AA Final at Cerritos College.

The Trailblazers cut the Central lead to 13-12 early in the third quarter on a 72-yard touchdown run by J.D. Sumlin but were outscored 21-7 the rest of the way.
Central answered with a 10-play, 85-yard drive with Anazjae Simpson hauling in a five-yard touchdown pass from Jameson Silva to make it 20-12 .
In the fourth quarter Je’Kob Jones capped an 85-yard drive with a one-yard run and although the extra point was missed the Grizzlies were up 26-12 with 8:08 left in the contest.
The Sierra Canyon offense, which had been struggling to find a groove thoughout the game, then marched right dpwn the field going 93 yards on eight plays with Chayden Peery scoring on a one-yard quarterback sneak to make it 26-19.
Sierra Canyon attempted an onside kick that failed but after Central went three and out the Blazers got the ball back at their own four yard line with 2:56 left with a chance 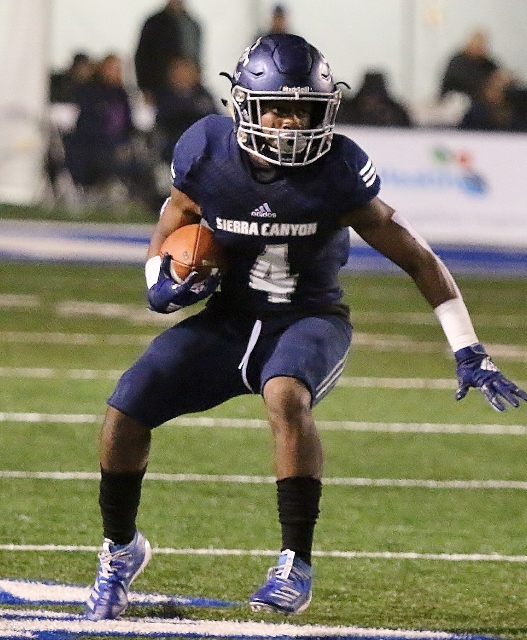 DJ Harvey hauled in six pases for 83 yards for the Trailblazers. (Photo by Duane Barker).

to tie. But on the next play Peery was called for intentional grounding in the end zone giving Central a safety and a 28-19 lead.
While simply trying to run out the clock on the next possession Jones busted loose for a 27-yard touchdown run with 1:02 left and that was all she wrote.
Central took the early lead and although Sierra Canyon got close the Grizzlies never relinquished it.
Central coughed up the football on its first possession but on its next series Xavier Worthy caught a pass from Silva and raced 34 yards for the score for a 6-0 lead.
Josh Bryan booted a 26-yard field goal for Sierra Canyon in the second quarter to get the Trailblazers on the board but Central had a quick response.
Silva hit Jeremiah Hunter on a short pass and Hunter did the rest racing 65 yards for the touchdown to make it 13-3.
Sierra Canyon punted on three of its first six possessions in the first half but Bryan did manage to kick another three as the half ran out – this one a 32 yarder to make it 13-6 at the break. 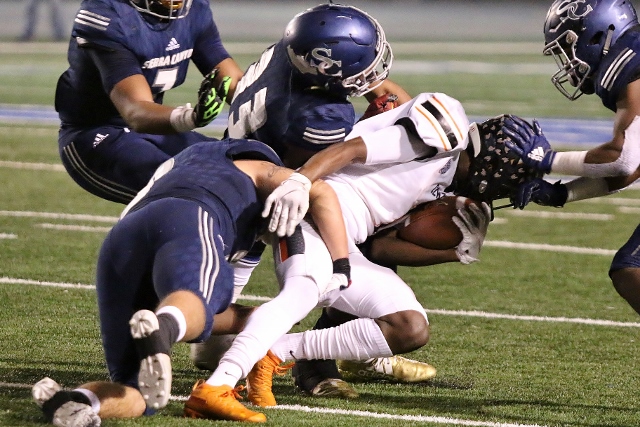 Despite the loss the Sierra Canyon defense bottled up the Central rushing attack. (Photo by Duane Barker).

Sierra Canyon got within one on Sumlin’s big run in the third but the Trailblazers couldn’t gain any momentum down the stretch and Central pulled away.
For Central Silva completed 21 of 39 passes for 353 yards, 3 touchdowns and an interception. Hunter was the main target with seven catches for 120 yards and a score. The Grizzles had only 66 yards rushing.
For Sierra Canyon Peery was 24 of 43 for 237 yards. Sumlin had 8 receptions for 44 yards and also rushed for 96 yards and the long TD run. DJ Harvey hauled in six passes for 83 yards and Brendon Gamble caught five for 46.
Central completed an undefeated run with the victory going 15-0. Sierra Canyon finished the season at 14-2.