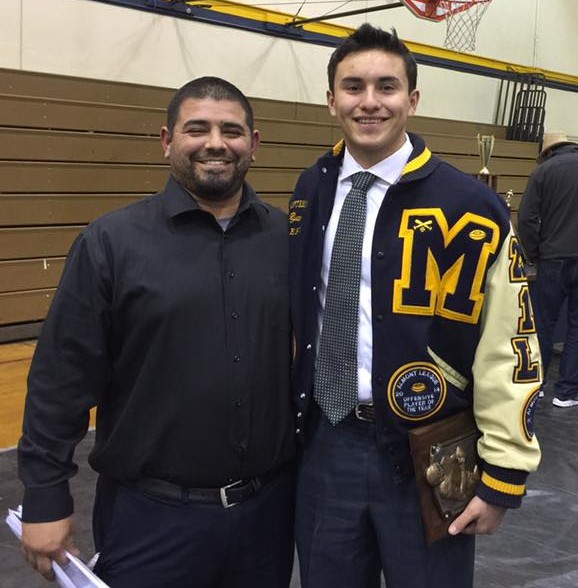 Peter Gonzalez (left) and Ryan Rivera (right) are two of Pete Gonzalez’ Top 5 players that he has coached.

Aubrey went on to play at East Los Angeles College. Aubrey was a hard-nosed competitor and RB. He never tried to outrun anybody. If you got in his way he put his helmet down and forced you to bring him down. He was a big back with great ability. He was very athletic for his size with great instincts and vision. What I enjoyed most about him was the look in his eyes. It was give me the ball and I will get it done. if the game was on the line or if we just needed a yard for a first down we were going to give it Aubrey and everyone on defense knew it also.

David always brought a spark to our team. He was a passionate football player combined with great skills to run and tackle. He had a great work ethic and always brought his A game with him every day. What I enjoyed most about David was he always had this great big smile on his face. He always had a don’t worry coach, I got this kind of an attitude. I never have coached a player that could run forward, backpedal to a zone, or go sideline to sideline like David could. He is an incredible athlete.

David originally committed to Minnesota State University out of high school but ended up attending and playing football at Cerritos College. David’s freshman year at Cerritos he started 10 games at LB. He was First-team ALL-Central Conference led Cerritos in tackles (76) along with 27 Solo Tackles and had a team high of 9.5 tackles for losses, a sack, 6 quarterback hurries, broke up a pass and forced a fumble. David’s sophomore year at Cerritos college he started all 11 games at LB, he earned second team
All-Central Conference. He had 79 tackles including 33 solo, 9.5 tackles for loss and 1.5 sacks, 1 int, broke up 3 passes, recovered 3 fumbles and forced another. Cerritos finished 9-2 that season. David went on to play football at Midwestern State

Isaac was a special talent. Yes, at only 5’6 145lbs he ran like he was a monster. I have never seen or coached a player who went downhill like a bullet to the LOS. His vision was incredible and when he hit the LOS he was up the second level before you could find him. He was so quick to make his decisions and so precise on every carry. It was fun watching Isaac run. Every game we played everyone knew “22” was getting the rock. He played like a monster. After each game opposing coaches always said the same thing to me, 22 is a stud. Funny how that 5’6 running back gave all defensive coaches fits. I remember a great conversation with Jim Singiser just before the start of a game vs Arroyo. I remember him telling me we have no one who can emulate his running style and speed to prep for you guys. Isaac was a special player.
After repairing his ACL Isaac went on to attend Cal State Los Angeles University

Ryan Rivera is a great athlete. He has great football instincts. He is your prototypical football player. He understands the game and works hard to be great. Ryan is the guy you give the ball too when the game is on the line. What I will always remember about Ryan is his confidence. At any point when the game is on the line. Whether it’s the final play, or 3rd and 15, or 4th and 5 he had an indescribable look of confidence that he is going to get it done. He wasn’t afraid to run over to us coaches and say I told you I would get this. He also took blame if the ball didn’t bounce our way. He made the game fun to watch and I enjoyed every game with him. We were Almont League Champions in 2014 and 2015. It was a great honor to watch my cousin Ryan play. His 337 yards passing against BG was pretty fun night to watch.
Ryan went on to play football at Finlandia University in Michigan

Robert De La Cruz (QB 6’1 170) Cathedral High School
Robert was League MVP, All State, All Area, All Everything.1998 Robert set a state record with 61 touchdown passes in 13 games.
In 1999 Robert threw 9 TD passes vs St Genevieve and also Robert broke his own record CALHI Sports state record with 65 touchdown passes in 13 games. His career yardage total was 8,437 yards, 126 Touchdowns in 2 seasons. Robert was a great student of the game. He worked hard and had a great competitor attitude. He played and made the game fun with his attitude. He showed up to work everyday and wanted to be the best. His approach to every game was ferocious. He was so calm and never intimidated.

Dwight Tardy (RB 5’11 200) St. Paul High School
Dwight was All First team Area, All CIF, First team All League.
Dwight was a special athlete. As a RB he was very powerful. He had sneaky speed to run away from you. He was about the purest down hill runner that I’ve been lucky enough to coach. He took the handoff, hit the hole and made you tackle him. What I enjoyed most about Dwight was his competitive pride. If you got a good shot on him, it was guaranteed he was going to get up and find you on the next handoff. Dwight went on to play football at Washington State University and was a four year starter. One fond memory was watching my Son Peter playing QB and handing the ball off to Dwight for his record breaking 9th TD in a game vs Crescenta Valley.

My all time favorite player is my son Peter. (yes I am a proud father)

Stats 67 comp 124 att 1014 yards 7 TD’s, 81 yards rushing 3 TD’s
I have to mention him on this list. Peter Played QB at St Paul and earned all-league honors. We played some really good teams and it was fun watching him play against teams like St. Bonaventure, Bishop Amat, Harvard Westlake, St Francis, S.O. Notre Dame, Chaminade, and Bishop Alemany. Some special moments for Peter are as follows: In Peter’s Junior Year he handed the ball off to Dwight Tardy for his 9th TD run vs Crescenta Valley and put Dwight into the record books. During Peter’s Senior year he battled to the last game of the season only to fall short of being St Paul’s All time leader in Pass Completions Percentage leader in school history. Just some of his great moments. At St. Paul’s football banquet the Legendary Head Coach Marijon Ancich who was the winningest football coach in California history at the time spoke about Peter being one of the smartest football players he had ever coached. Peter was also an all-league baseball player who got a chance to play in a CIF title game ending up CIF runner ups. Peter took those smarts and has since grown up to be a fine young man and an exceptional coach. I would like to thank all of the coaches who have coached under me and have been an influence in helping him and vice versa in so many ways. Coaches like Brian Zavala, Hector Spathias, Robert Castaneda, Mark Paramo, Gary Canales, Jerry Chou, Gil Jimenez, Casey Morales and all of our current Montebello Oiler staff.