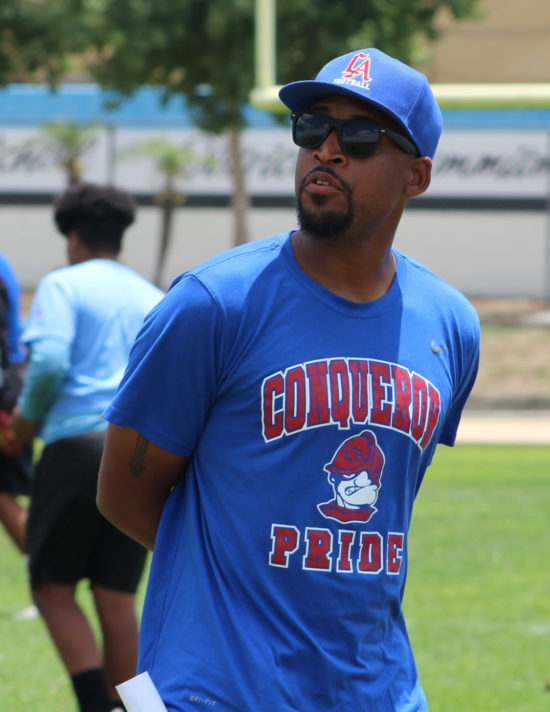 Travis Brown took over as the Los Altos head coach in 2018 and has an overall record of 13-10 in his two seasons. The Conquerors have made the playoffs both years.

Q: How are you keeping in contact with your players and coaches during this time of social distancing?
A: We as a staff have been using Zoom and Hudl as the main way to keep in touch as a team. I personally meet 2-3 times a week with our leadership council and coaches. Our focus has been checking on players and their families and well-being, and limited focus on football. These are tough times and we have stressed the importance of family time.

Q: After High School you played at New Mexico. What were the main factors in choosing New Mexico?
A: I was your typical high school player that had average to above average production, but had a higher “upside” than most because of my size and speed, so I wasn’t heavily recruited based solely on production. That being said I received a lot of offers from D1-AA, D2, and NAIA schools. I received a lot interest from D1-A programs, but no one pulled the trigger. I went on my official visit to New Mexico, loved the campus, community, and the coaching staff made me feel at home and wanted. When Coach Long offered me, I committed on the spot, and the rest is history.

Q: After college you were an undrafted free agent and I believe you originally signed with the with the Seattle Seahawks. How exciting was that and what was the extent of your NFL career?
A: That’s correct. I was signed by the Seahawks as a priority free agent during the draft, and moved around a little bit afterwards. It was an exciting time for me and my family, and although it didn’t work out the way we hoped or expected based on my projections, it was an awesome experience. The extent of my career is that I was a 2-year practice squad player with most of my time spent in St. Louis with the Rams.

Q: When did you decide you wanted to be a high school coach?
A: To be honest I always knew that I wanted to coach, just never envisioned what level. High school football helped to shape me into the man that I am, more than any other level I’ve played. From my Jr All-American days, and through the rest of my playing days, most of my coaches suggested that I become a coach one day and encouraged it, because of my eagerness to learn and know the whys and whats of every aspect of the game. So, in that respect it was somewhat engrained in my mind that I would coach one day. My choice to ultimately coach high school came in 2008 when I helped my fellow Conqueror Bobby Godinez coach 8-man football at La Verne Lutheran. From that point, I knew I wanted to coach high school ball and give back and help to shape young men who I felt needed guidance the most.

Q: Do you have any aspirations to be a head coach beyond the high school level?
A: I have experienced coaching beyond the high school level, and although I enjoyed it, I am happy and content where I am at the high school level. That’s not to say that I will, or will not pursue opportunities in the future, but the thought is not one that crosses my mind at the moment. I have a wife and 2 kids at home that I enjoy spending time with, and I’m not ready to sacrifice that at this point in my life. A wise coach once told me that coaching college football is a 13-month a year job, and I’m just not ready for that commitment right now.

Q: What coach, high school or college or the NFL, had the biggest influence on you and why?
A: I have been fortunate to have played for, and have been coached by a lot of great coaches in my opinion. Most of which I still remain in touch with, so I think it would be an injustice to say that one coach had the biggest influence on me. But to name a few of the guys that immediately come to mind are Coaches Greg Gano (obviously, haha), Matt Wells (Texas Tech), Rocky Long (New Mexico), and Mike Urrutia (who I now have the honor of coaching his son). These are some of the coaches that I have learned the importance of having and building relationships on and off of the field from. Also, these are coaches that challenge me to be a better person. Those 4, above many others I have learned from and have helped to shape my coaching philosophies and overall approach to the game.

Q: You had a couple of stops, Duarte and Cantwell, prior to Los Altos. How important was it for you to take the Los Altos job and was it your goal to coach at your alma mater?.
A: Those 2 jobs were crucial to my development as a coach and I wouldn’t trade those experiences for anything. They collectively helped me to learn the game better and ultimately understand the intricacies of running a program. Having the opportunity to get my feet wet coaching at smaller programs was what I needed at those points of my coaching career. I am thankful I had those experiences because they helped me to prepare for my ultimate goal of returning home, and hopefully continuing to run a successful program for many years and decades to come.

Q: Last year the Conquerors went 9-3 overall and went to the second round of the Division 6 playoffs. How does the team look for this year and can it be even better?
A: We had great year and I was extremely proud of the growth of our young men. They showed a lot of resiliency and fortitude in a lot of tough games. We lose some key contributors from our past team as we head into the 2020 season but return a great bulk of our starters and key contributors, as well as some really promising young talent. We have the opportunity to be a much better team than we were last season if we can put it all together, but we won’t get ahead of ourselves.

Q: Are kids today different than when you played? And if so, how do you coach to that?
A: This is a topic of discussion that comes up in coaching circles more often than once or twice. In my honest opinion, yes, of course kids are different than when I played. But that is neither good, nor bad. Times are different, so of course the people are different and that goes without saying. More than kids changing though, I believe that the parents have changed, and we deflect that onto the kids we coach, and that’s the reality. But to answer the question of how I coach that, the answer is with understanding. The key to coaching is in building relationships, and that is how I combat that particular barrier. My approach to coaching is stern but I also like to have fun with my players. I think it is important that they understand who I am as a person, and I know the same about them. I played in a time where a coach said run through a wall, and we didn’t question it. That isn’t the case in today’s society, so you have to understand there will be questions, and that’s ok. Kids today don’t care what you know, until they know you care. So, I do my best to make sure I teach thoroughly, and explain well, while balancing the above mentioned.

Q: It may be hard to nail down just one but who was the best player you ever coached? Or players if more than one (3 or 4)?
A: The best and most complete football player that I’ve had the pleasure of coaching was a young man by the name of Anthony Ruiz while at Cantwell. Ruiz was 2 way league MVP, 1st Team All-Area, and 1st Team All-State player that did it all and had the football IQ to match. But I’ve had the honor of coaching other great players who are in the discussion as well: Angel Villanueva and Justin Hillyer at Duarte and of course most recently Rene Zaldivar of Los Altos. I have 2 nephews that I coach in Zed and Zec who I feel will be in the conversation once their high school careers are complete…but again, only time will tell.

4 Comments to "Q & A With Los Altos HC Travis Brown"