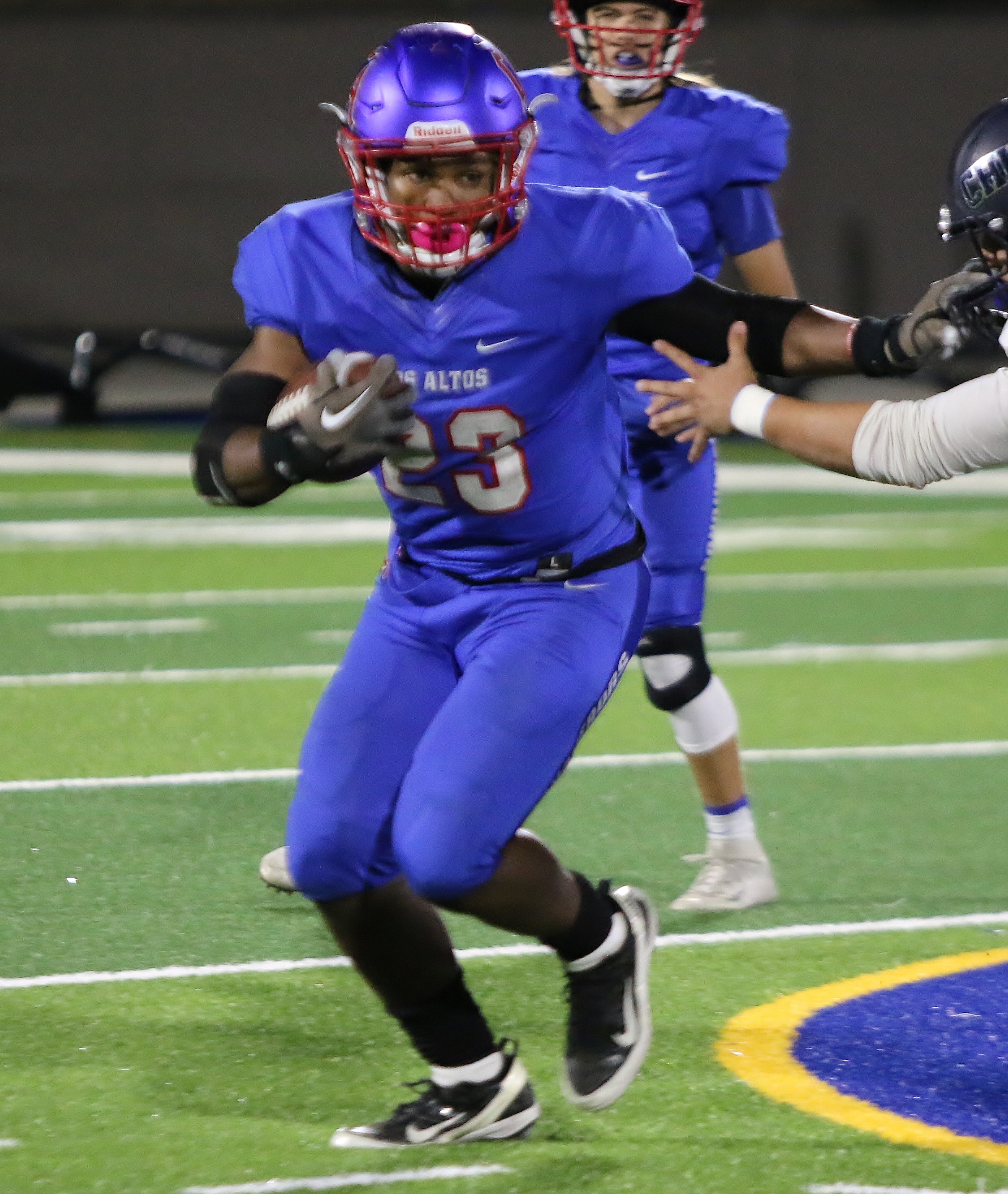 Tyler Nevens is at the top of Dale Ziola’s list. (Photo By Duane Barker).

Dale Ziola was the head coach at Los Altos for six years before stepping down after the 2016 season. He led the Conquerors to two CIF Championship games in three years. Last year Ziola returned to the sideline as the head coach at Covina. Here are the Top 5 players that he has coached. All five are from Los Altos.

Tyler Nevens
The BEST! And the sweetest kid to boot! Obliterated all school records. LA has had numerous CIF Players of the Year before, but none carried the load Tyler did (he did not
have D-1 bound teammates). But, his teammates loved him, that’s why they broke their backs for him. The consummate teammate. After carrying the ball 6 straight times to get us to the 28yd line, RB Coach pulled him for a breather, the back-up (Hank Lopez) rips off a 28yd TD the next play. Tyler was the first one in the endzone carrying Hank off the field in celebration. Back to Back 300yd play-off games as a soph, 2500 yards as a senior. Was also a 1st Team All-League DB. 2x All-State.

David Tolmachoff
LEAGUE MVP (not Lineman of the Year), beating out Zion, Castille, and all the other skill guys. David played GUARD and DL. Wanted to be a TE & LB, but the team needed
him upfront, and he obliged, and succeeded. At 225lbs, was the strongest cat out there, blocking (toying with) everything in sight. He paved the way for success, and smothered opposing offenses. The two time All CIF lineman survived a car wreck summer after junior year (he was on a bike, the Scion was doing 35mph [chp report] and the car was totaled) to go on to an ALL STATE senior season, leading his team to the Finals.

Andrew Manuele
In 2016, Andy was the only player in all 13 CIF Divisions to be names ALL CIF on both sides of the ball (WR & DL). He was really a TE as opposed to WR, blocking as effectively as catching the ball scoring TDs. He was also the Long Snapper on Punt team and the holder on PATs. Played half his senior year with a broken hand, modifying the cast to expose his pointer & middle finger. He commanded opponents respect so much, that the Diamond Ranch staff nominated him for League Def MVP before I could even open my mouth.

Tevita Sina
A freak of an athlete, standing 5’10” 195lbs. Could clean 285, do a standing box jump up to 48” and chase down everyone on the field without breaking a sweat. Tevita was a 2x ALL CIF Defensive Lineman who also earned All-League RB honors playing in a change of pace role. As a junior in 2013, he destroyed Miami-bound Joe Brown of Paramount recording 2 sacks, 2 fum rec and 2 TDs (one of them in the backfield so fast, he beat the RB to the mesh and took the ball to the house!). He never didn’t have a smile on his face.

Justin Fa’aola
The man strong enough to hold anchor & redirect the sinking ship. He was just about the biggest kid on the team, so we made him a RB. He made his own holes when needed,
or picked up his OL to use as human shields along the way. He was the rebar in the mortar that kept a truly special group of seniors together for the season that put LA back on the map. Talk about stubborn, refusing to go down as losers group of young men, and Justin was the lightning (or shall I say thunder) in the bottle that sparked it all. An ALL-CIF RB who was also a 1st Team All-League LB. Yet, I am more proud of him for the man he has become than what he accomplished on the field. Before his senior year, there were doubts about graduation, and staying out of trouble (I guess 3 years of getting pummeled on the gridiron can do that to a kid), and now he stands before us a local pillar, having a budding career in real estate, a loving husband and doting father.

I could go on forever, but list says 5…here’s looking at you SV, EM, LB, DJ, Scuba, AG, Thor, OV, CM, EC, etc. Seeing all you young men grow up swells my heart. I LOVE YOU GUYS!