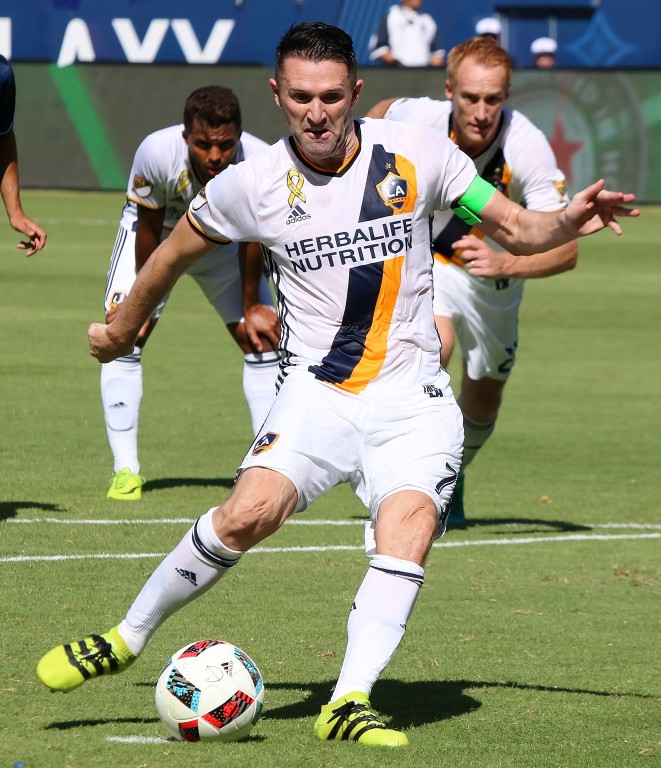 LA was even with Seattle at halftime before things went awry in the second half. Tied at one, Jordan Morris raced past the Galaxy defense and beat Brian Rowe in the 63rd minute for a 2-1 Sounders lead.

In the 74th minute Morris struck again as he blasted one by Rowe in the front of the net. Four minutes later, Ozzy Alonso took a nice dish and stuffed it by Rowe for a 4-1 advantage. There were still over 12 minutes remaining but everybody in the house knew that was the clincher. 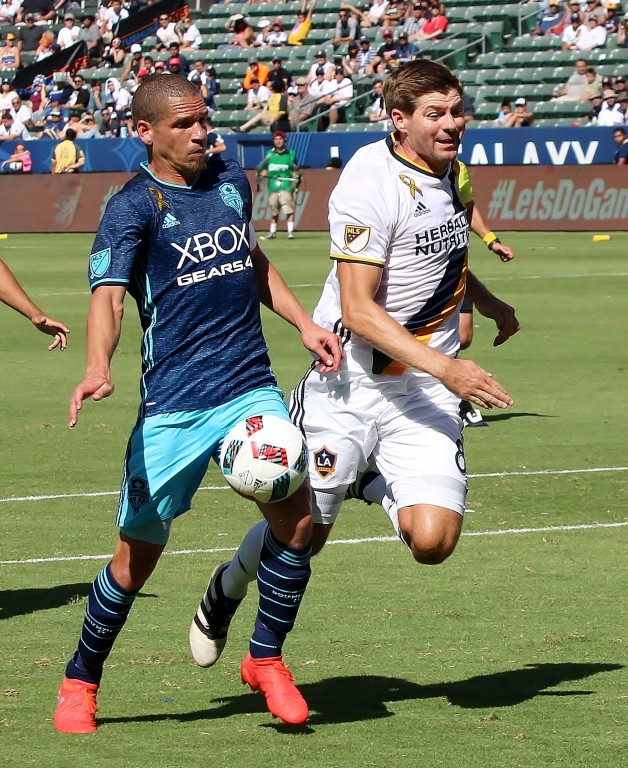 Steven Gerrard draws the penalty that lead to the Galaxy’s second goal. (Photo by Duane Barker)

The Galaxy had some chances early.

Robbie Keane and Emmanuel Boateng both had their shots. Keane’s header in the seventh minute and Boateng’s blast in the eighth were both saved by Seattle keeper Stefan Frei.

Keane gave the Galaxy their only lead of the game when he took a cross from Sebastian Lletget and headed it by Frei in the 20th minute for the first goal of the match.

After a hydration break at the 30th minute, Giovani dos Santos was stopped by Frei on a break away in the 33rd minute. It appeared that dos Santos had Frei at a disadvantage but the Sounders’ keeper kicked the ball away at the last second.

Seattle then got even two minutes later on an own goal. Andreas Ivanschiltz booted a corner kick that glanced off of Chad Marshall and then deflected off of Jelle Van Damme and past Brian Rowe into the net.

Dos Santos rushed up the left side in the 42nd minute but his kick was again halted by Frei. Two minutes of additional time added in first half.

In the second half Robbie Rogers has an opportunity in the 48th minute but Frei again came up big. The Galaxy had been buzzing around the net early in the second half but wasn’t able to get anything by Frei.

The Sounders then broke the tie and then broke it open with the three goal spurt.

Landon Donovan the entered the match for Baggio Husidic in the 66th minute pleasing the StubHub Center crowd who had begun to chant “We want Landon” just moments before.

In the 85th minute Keane picked up his second goal of the afternoon as he banged home a penalty kick to make the final score 4-2.

Five minutes of additional time in the second half but it didn’t change the outcome.

The Galaxy fell to 11-5-15 with the loss while Seattle improved to 11-13-5. LA remains in third place in the MLS Western Conference with three regular season games left.