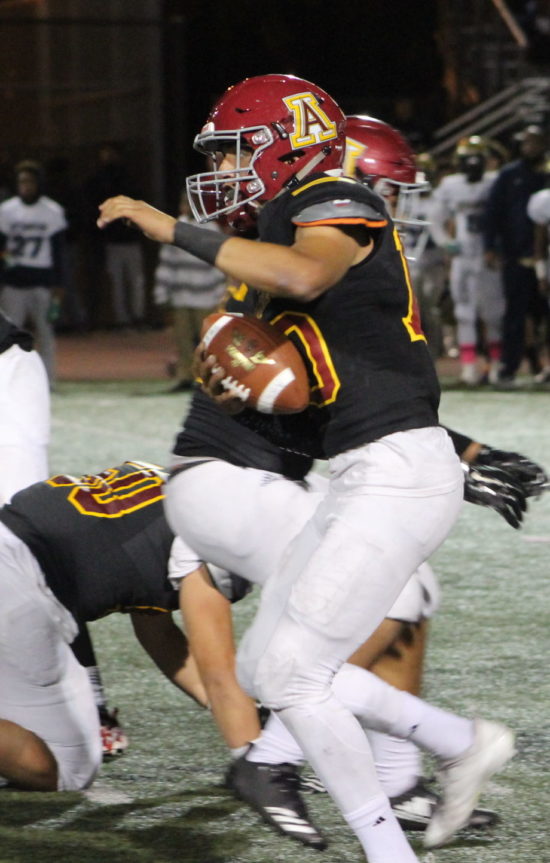 Dylan Guerra threw for three scores and ran for one to lead the Apaches.

(Arcadia) – Arcadia jumped out to a 34-14 halftime lead and cruised to a 41-14 win over Muir Friday night in Pacific League action at Salter Field.

Dylan Guerra threw three touchdown passes and ran for another to lead the offensive charge. He finished with 302 yards passing with 278 of those coming in the first half.

Frankie Contreras and Ahmad Lipscomb both had  big nights receiving for the Apaches. Contreras caught 6 passes for 169 yards and a touchdown and Lipscomb hauled in 5 for 140 and two scores.

The Apaches got on the board first on a trick play. Rolandiss Whitener took a handoff on a reverse and pulled up and fired a 61-yard touchdown pass to Lipscomb on the first play from scrimmage to make it 6-0 after the extra point was blocked.

Later in the first quarter, Guerra capped a seven-play, 71-yard drive with a four-yard run to increase the advantage to 13-0. Early in the second quarter Guerra found Chris Wilson, who bulled his way into the end zone for a nine – yard score and a three touchdown advantage.

Muir broke through later in the second. A 65-yard run by Tyron Clark set up a two-yard plunge by Aulonzo Bailey to cut the lead to 20-7. 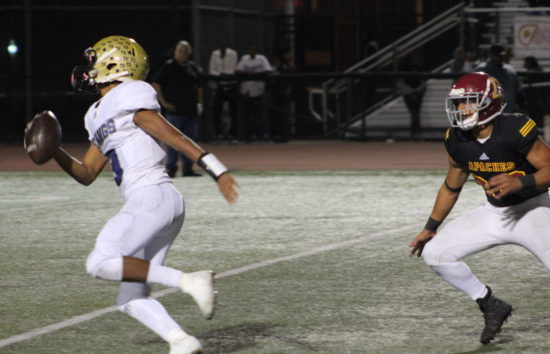 It was tough sledding for Brian Love and the Mustangs.

With 2:20 left the Apaches struck back with a big play as Guerra found a wide open Contreras who got behind the Mustang secondary and went 81 yards for the score.

Jahlique Stephens answered with a three-yard TD jaunt for Muir to cap a five-play drive with 1:02 let in the half. That was the last time the Mustangs scored. Meanwhile the Apaches had one more surge left in the first half.

After an attempted onside kick left the ball at the Arcadia 49, the Apaches needed just six plays to get another six points. Lipscomb grabbed his second touchdown of the night on an 11-yard pass by Guerra with 13 seconds left and a 34-14 lead at the break.

Neither team could get much going in the second half. Muir turned the ball over twice and Guerra threw three picks but none of them hurt the Apaches as Muir failed to convert.

For Muir Stephens had 14 carries for 50 yards and a touchdown and caught four passes for 42 yards. Brian Love threw for 128 yards for the Mustangs but was hurt by two interceptions. Arron Wilson had two receptions for 44 yards.

Arcadia’s victory sets up a showdown next week with Crescenta Valley for the Pacific League title. The Apaches improved to 6-0 in league and 7-2 overall. Muir fell to 3-3 in the Pacific and 6-3 overall.