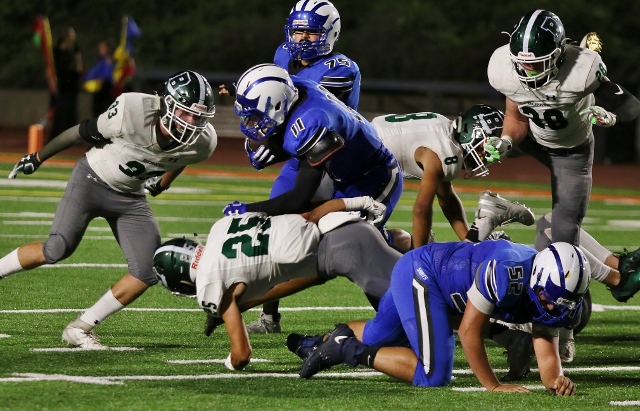 The Smudgepot has been one of the great high school football rivalries in this area for years. This is Week 3 from last year. The game was played on Saturday night September 14 at Citrus College.

(Glendora) – Bonita was up by three touchdowns early in the fourth quarter but then had to hold on to beat San Dimas 35-25 Saturday night in the Annual Smudge Pot battle at Citrus College.

After Aalias Williams hauled in a 42-yard touchdown pass from Sean Jastrab on the first play of the fourth quarter the Bearcats were cruising 35-13. Maybe get a stop, chew up some yards on the ground and run out the clock. But this was the Smudge Pot and San Dimas had other ideas.

The Saints put together a seven-play, 73-yard drive as Ryan Bulick hit Billy Hennessey on a 45-yard touchdown strike to make it 35-19. The Saints then recovered an onside kick and drove down to the Bonita six-yard line but they coughed up the ball and the Bearcats took over.

However the defense came up big on the next series. Linebacker Frank Herrera stepped in front of a Jastrab screen pass and returned it 32 yards for a touchdown and although the two point conversion attempt failed, San Dimas was within 10 at 35-25 with 2:32 remaining.

San Dimas then squib kicked it, Bonita recovered and was able to run out the clock with a couple of first downs.

The Saints got on the board first when Hennessey hauled in a 13-yard touchdown pass from Bulick just before the end of the first quarter to cap a 61-yard drive for a 7-0 lead. 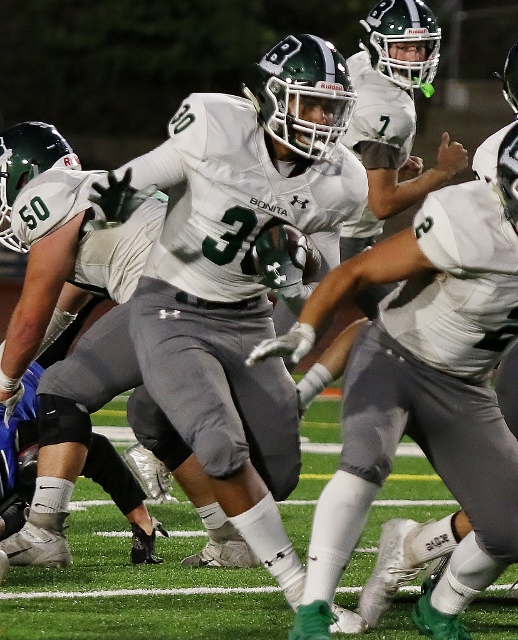 The Beracats then pounced quickly in the second quarter. A long kick off return led to a 27-yard scoring strike from Jastrab to Jacob Horne to tie it. Katin Suprenant then picked off Bulick on the next series setting up Bonita at the San Dimas 27. Three plays later Jastrab fired a 15-yard touchdown pass to Ethan Durham for the lead.

Penalties forced the Saints backwards on the following possession and they had to punt from their own five-yard line. A shanked punt left the Bearcats at the San Dimas 15. Joseph Flores crashed in from the one-yard line just three plays later and just like that, with 7:24 left in the second quarter, it was 21-7 Bonita.

Bonita took that advantage into the break and picked up right where they left off immediately in the third quarter. Jastrab threw his third touchdown pass of the night and second to Horne – this one a 70-yard catch and carry that Horne ran under and sailed down the far sideline to put Bonita in complete control.

Buccola scored on a three-yard jaunt for the Saints to cut it to 28 -13 later in the quarter but Williams’ TD catch early in the fourth seemed to ice it until the Saints rallied with one last push.

Jastrab had a big night for Bonita with 317 yards through the air and four touchdowns. Williams and Horne each had 97 yards in receptions, Horne with two touchdowns and Williams one.

Bonita improved to 4-0 on the season and will get a well deserved bye next week. San Dimas (1-2) will face Colton on the road Thursday night.