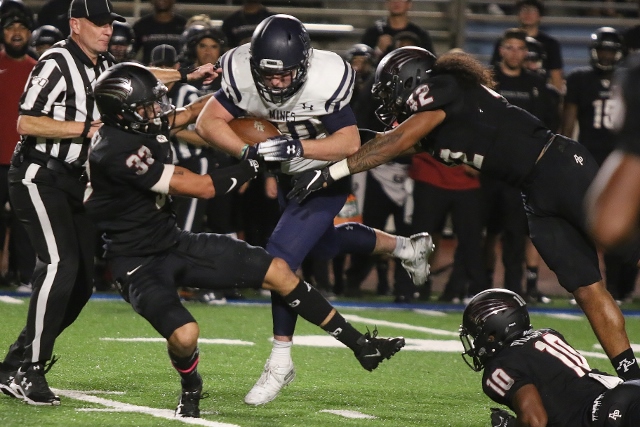 The Cougars had trouble stopping The Mines’ running attack. (Photo by Duane Barker).

By Tim Peterson
(Glendora) – Azusa Pacific fell behind early and was never able to catch up in a 49-27 loss to Colorado School of Mines Saturday night at Citrus College.

The Cougars were down by 15 at halftime before rallying for three touchdowns in the third quarter but couldn’t make enough stops to get any traction.

Colorado School of Mines opened the scoring on its first possession marching 65 yards on eight plays for the score. John Matcoha scored on a one-yard keeper to finish the drive.
Azusa Pacific drove down to Colorado’s 18 yard line on its first possession before stalling where Ramzee Jaridly booted a 35-yard field goal to cut the lead to 7-3.

Colorado came right back with another score. Matocha hit Sean O’Dell with a 12-yard touchdown pass to cap a 75-yard, 10-play drive and it was 14-3 Orediggers with 4:19 left in the first quarter.

Early in the second quarter Jaridly kicked a 45-yard field goal for the Cougars to make it 14-6.

Late in the quarter Colorado Mines converted a fourth and four at the APU 31 and then Matocha hit Josh Johnston in the corner of the endzone for a 25-yard touchdown with just under two minutes left in the first half for a 21-6 lead which Colorado took the into the half.

Azusa Pacific took the second half kick off and drove 75 yards. Tyrone Williams Jr. connected with Jasiah Richard-Lewis for a six yard TD strike to cut the Mines lead to 21-13.
On the next possession Scott Marshall missed a 35-yard field goal attempt. 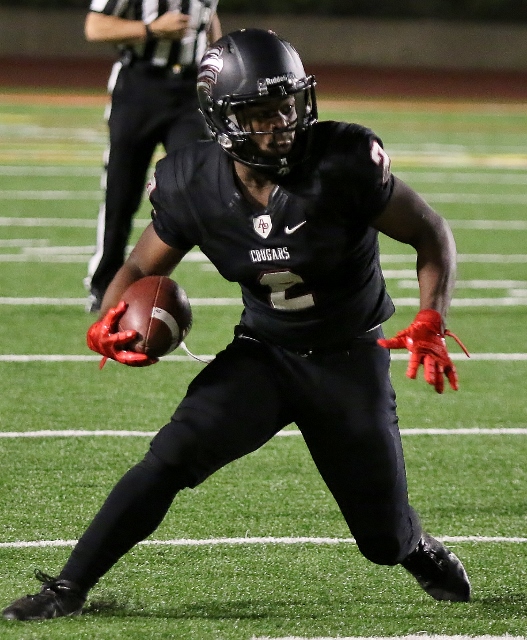 APU fumbled the exchange on a handoff on the ensuing series and Jimmy Bauer fell on it on the Cougar 24. The Orediggers cashed in four plays later when Michael Zeman crashed in from the 12-yard line to make it 28-13 with 6:22 left in the third quarter.

The Cougars immediately answered when Williams tossed a screen pass to Gil’Scott Jackson and he rumbled 77 yards to zone for six and Azusa Pacific was back within eight points.
The Mines punched back on the following possession as Matocha scored on a 15-yard run to cap a 75 yard drive to go back up 35-20 with 2:16 left in the third.

The third quarter officially became a shootout as the Cougars wasted no time in finding the endzone again. Williams hit Noah Bogardus in stride and he crossed the goal line 51 yards later to make to 35-27 with 50 ticks remaining in the third quarter.

Early in the fourth quarter Zeman got his second of the night for the Orediggers as he busted off a 63-yard touchdown run to put Colorado back up by 15 at 42-27.

APU was forced to punt on its next possession but Colorado failed to take advantage. Matocha was intercepted by Josh Olave who returned it to the Cougar 45.
Colorado returned the favor however as Jaden Williams leaped in front of a Tyron Williams pass and Colorado took over at its own 20.

Two plays later a 61-yard run by Zenan set up Mines at the Cougar 11 yard line. Two plays later Zenan had touchdown number three as he punched it in from the one to make it 49-27 with 3:43 left.

Kobe Brewster picked off Williams on the first play on the Cougars next possession and Colorado was back in business at the APU 27.

The Cougars held but Jack Rice, who replaced Williams for the Cougars on the last series, was intercepted and Colorado School of Mines walked out with the 22 point victory.

For Mines they piled up 395 yards on the ground with Zenan rushing for 298 and the three touchdowns. Matocha completed 26 of 31 for 180 yards and two scores and also ran for 108 yards and two TDs. Colorado racked up 575 total yards on the night.

Williams threw for 328 yards and three touchdowns for APU but he was hurt by two critical fourth quarter interceptions. Colorado Mines held the Cougars to just 72 yards on the ground.

Colorado improved to a perfect 8-0 on the year while Azusa Pacific dropped to 1-6.

Next up for the Cougars is a home game next Saturday night against Central Washington.

2 Comments to "Azusa Pacific Has No Defense for The Mines"