“We zip in, we pick ’em up, we zip right out again. We’re not going to Moscow. It’s Czechoslovakia. It’s like going into Wisconsin.”
—John Winger

Right off the Top: Odor belting Bautista was the best punch I’ve seen thrown since Mike Tyson knocked out Alan Garner in the Villa at Caesar’s Palace back in the summer of 2009.

Note to Paul Schilling (CV), Don Lou Farrar (CO), & Mark Holman (SD): I intend on hitting all three of your events on Saturday…I require parking and beverage. I know Coach Schilling and his program are partial to donuts, so I’ll put my bid in for a chocolate cruller right now.

Prep Football One More Time: I’ve been asked why we’re not doing lists and top this and that on the site right now. With the new divisions not being released until later this summer and us undecided on the top 50 teams to cover, we’re in limbo.

So, we’ll talk in the broad…If I was starting a high school program in the San Gabriel Valley this season, I’d want Northview’s Steven Comstock as my quarterback.

So Los Angeles Dodgers fans…When should management just decide to put Trayce Thompson in the lineup every day?

Just for the record because we are taking a lot of static on the boards, it’s probably time for a reminder…Mid Valley Sports is different than the Mid Valley News…Mid Valley Sports is run by Tim Peterson, Duane Barker, and myself…occasionally Andy VillaTheDevil plays apart…This site is 90% football…In regards to girls sports, if the analytics were there you’d probably see more than the occasional item…but the analytics aren’t there and it makes tough to budget time for them.

(Of course, we could go gender-neutral and not identify any sports as uniquely ‘boy’ or ‘girl’…Though, I’m sure that day will arrive soon enough.)

At the Mid Valley News…which is owned by Valley Communications…I do include items from girls soccer to volleyball, basketball, and softball…Every week I include a top ten softball and basketball when they are in season.

We also list in our “Scoreboard” scores from girls basketball and softball games…Soccer coverage, as it is with the boys, is harder to give due to nearly all of the coaches being walk-ons…and really bad at updating their rosters on MaxPreps.

Mid Valley News hard copy hits the streets every Wednesday and the website is www.midvalleynews.com

Again, we sprinkle in a few different things but this IS a football site.

***
Why are ESPN’s ratings are dropping across the board?

One, the most obvious reason, who watches television anymore?

Two, they are old. The schtick is old. When you see the ESPN studio shows they still perform like something out of the 80’s and 90’s but with better graphics. Who has patience for something that takes forever to get to the point? Plus how many sob stories do I have to hear about? Everyone has a sob story.

Three, ESPN preaches more than I do. They view themselves as authors of social change. Game analysis has become subservient to whatever cause is the flavor of the day. It’s lockstep boring and very predictable.

Bottom line for loss of interest is best described by a sports fan on ESPN’s own message board: “Tell me who won the blanking game, the blanking score and who hit the blanking home run!” 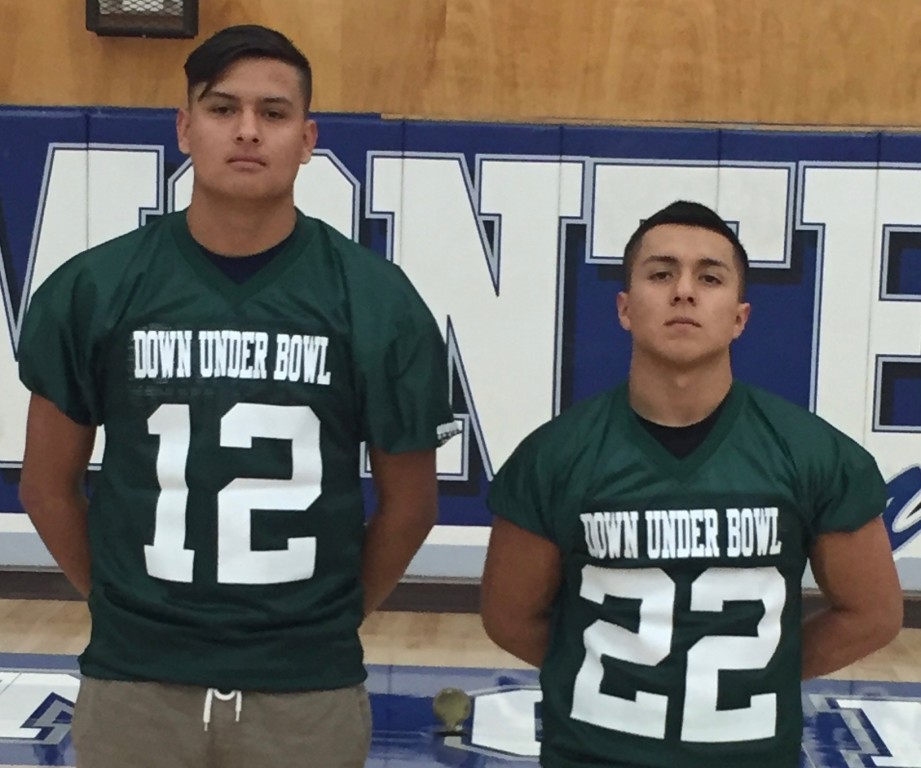 Graduating Lions Edward Dominguez (left) & Roy Barajas (right)…Getting geared up for Down Under Bowl in Australia.

Midbits (same as ‘Tidbits’)
Midbits: “The boys and I have been working hard to make this dream happen. The deadline is very close and all we need is $2000 to make this a reality. Thank you to everyone that has helped out.”—Former El Monte HC Joel Sanchez on Edward Dominguez and Roy Barajas who have been selected to play in the “Down Under Bowl” in Australia this June. They’ve been raising funds to cover their expenses since January. If you would like to help contact Sanchez at El Monte High School.

Midbits: The Angels are in trouble, aren’t they?

Midbits: When I was a kid I dreamed of being a Dodger, a Met, saw myself even has an Angel…but I never knew anybody that swung a Whiffle Ball bat in their backyard and dreamed; “Someday, I’m going to play for the Padres!” …I mean, who’s ever done that?