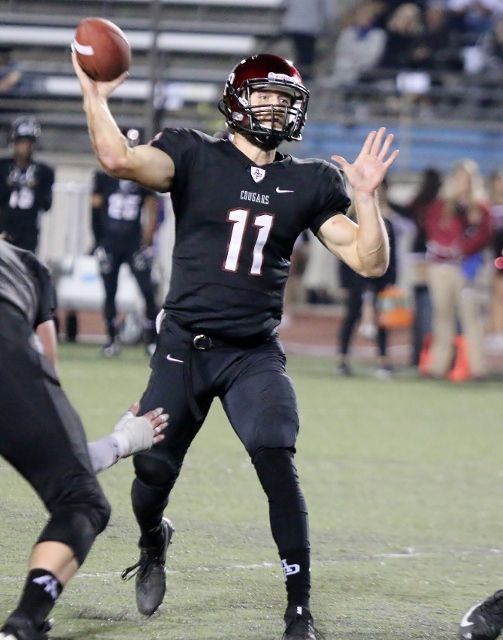 (Glendora) – It looks like Andrew Elffers saved his best for last. Elffers, in his last game in an Azusa Pacific uniform threw for 333 yards and six touchdowns as the Cougars beat Colorado Mesa 56-35 Saturday night in the season finale at Citrus College. Elffers completed 21 of 37 overall without an interception with three of his touchdown passes coming in the fourth quarter after Colorado Mesa had fought back to tie it. Twice in the quarter he hit on big passes to Darrell Adams Jr. including the final one of the night on a 29-yard toss.

“He’s the DNA of the program. When you recruit a guy like that, a local guy, with the talent he has and to see him every single year keep growing up, we saw it tonight it showed the champion kind of young man he is,” said Azusa Pacific Coach Victor Santa Cruz. “To lead this team and to have six touchdowns against that caliber of defense is pretty good.”

Azusa Pacific took advantage of a Colorado Mesa fumble in the first quarter to get on the board first. Kurt Scoby scored on an 18-yard run to put the Cougars up 7-0.

Colorado Mesa responded with a drive that was capped by a David Tann one-yard plunge to tie it at seven.

Lavell Thomas intercepted Colorado quarterback Eystin Salum to set up another Cougar score early in the second. Elffers threw his first of the night when he connected with Weston Carr for a 17-yard touchdown and a 14-7 advantage.

Colorado Mesa turned it over again on the next possession as Taliuaki Suliafu picked off a Salum pass and the Cougars took advantage again. Scoby finished a drive with a one-yard run for his second TD and a 21-7 lead.

The ground game was in effect with Kurt Scoby. (Photo by Duane Barker)

The Mavericks found the end zone on their next series when Salum used his legs breaking off a 32-yard touchdown scamper through the heart of the APU defense to cut the lead to 21-14.

However Azusa Pacific wasted no time lighting up the board again. Elffers hit Carr again on a short pass and the sophomore did the rest getting loose for an 87-yard touchdown sprint to put the Cougs back up by 14.

Thomas picked up his second interception and Azusa Pacific’s third of the game but the Cougars were forced to punt. 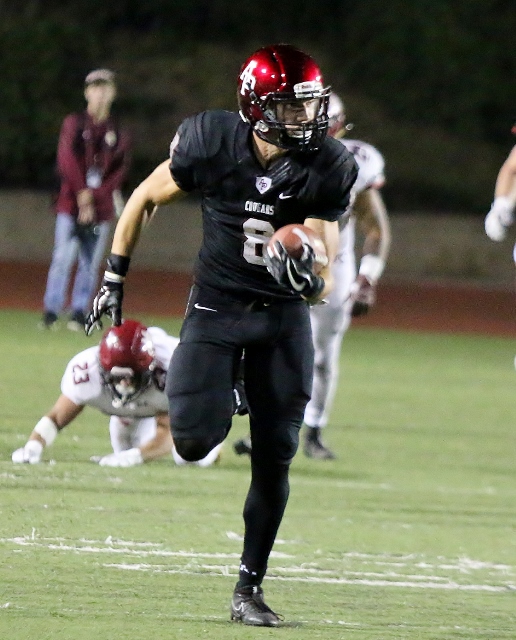 Weston Carr was at his best with 10 catches for 203 yards and 3 scores. (Photo by Duane Barker)

But Salum threw his fourth pick on the next series as LeAndre Jefferson picked him and APU took over at the Colorado Mesa 27 with under a minute left. Four plays later Elffers hit Jordan Bogardus for a three-yard score with 24 seconds left to make it 35-14.

On the ensuing kick off Colorado Mesa’s Virnel Moon fielded it at the 11, broke to the outside and returned it 89 yards for the touchdown. Azusa Pacific took the 35-21 lead into the half.

Elffers had thrown for 199 yards and three touchdowns in the first half while Scoby ran for 97 yards and two scores.

On the Cougars’ first possession of the second half Colorado Mesa blocked the punt and took over at the APU 15. Three plays later Rope Ruel, in place of Salum, fired a nine-yard touchdown strike to Tanner Quick to make it 35-28.

The Mavericks were quick to tie it on the next possession. Azusa Pacific punted the ball away. Salum, now back in the contest, fired a bullet to a wide open Peter Anderson who got behind the APU secondary for a 43-yard touchdown and just like that it was knotted at 35.

The Cougars completed a drive early in the fourth quarter as Elffers tossed his fourth touchdown of the evening, a 26-yard pass to Darrell Adams Jr. to put APU back on top.

Later in the quarter, Elffers hit number five as he connected with his favorite target again on a nine-yard touchdown pass to Carr. For Carr it was his third touchdown reception of the game.

The Cougars stopped Colorado on fourth down and took over at their own 39. Elffers then iced it as he threw a 29-yard touchdown pass to Adams for his sixth TD to make it 56-35.

Carr, as he has been throughout the season, was Elffer’s favorite target. He hauled in 10 receptions for 203 yards and three touchdowns. On the ground Scoby tallied 160 yards and two scores.

“It’s been a special year. Even though we didn’t envision this, going 7-4, our team showed a lot of character battling through adversity, and that’s life,” Elffers said. “There’s ups and downs and this season was a great teaching point. That’s why we play sports.”

Elffers also reflected on his four year career as a Cougar.

“This program means the world to me. I thank the Lord for bringing me to this place. I had a couple of Division 1 offers going out of high school but I saw something different in this place. It was a “God First” University and I wanted to be a part of that,” Elffers said. “I wanted to become a character man and guy who is going to stand up for what is right in this world because we need more men to do so. This program has taught me exactly that and I’m looking forward to taking what I’ve learned from this program and taking what I’ve learned from Coach Santa Cruz and applying it to the next chapter of my life.”

As Elffers stated the Cougars finished 7-4 with the win in the final game while Colorado Mesa ended the year at 9-2.