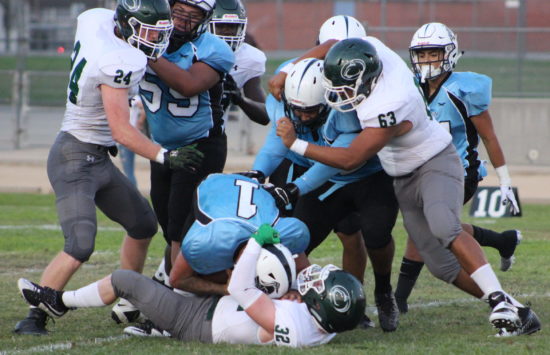 The Bonita D (shown here vs. Arroyo) will need to lock down against San Dimas in the Smudgepot

El Monte, another MVL team, blew out South Pasadena 59-6 two weeks ago. It won’t get any better for the Tigers against Arroyo. If El Monte dropped 59, Arroyo may hit 70. But we won’t go that far. Knights win big though.

South El Monte finally got in the win column  last week while Bellflower has been perfect so far. The Buccaneers haven’t just been squeaking by. They’ve outscored their last two opponents 97-0. This is a tough hill for the Eagles to climb. Bucs roll.

They finally bought this game back after a six year hiatus. It’s been a struggle for the Bulldogs. They did get a W over Crenshaw two weeks ago but last week they were crushed by Northview at home. The Colts have just two games under their belt. They lost a tough one to Los Altos but last week they put a whipping on South El Monte. There have been years when these two squared off that both teams were at their peak. This isn’t one of them. Covina is simply better. West Covina is still a couple of years away. Covina cruises.

Both teams need a win here as they try to gain some momentum before league play starts. The Dons looked impressive in a win over Bell Gardens but their defense was torched in losses to Northview and Pomona. The Oilers have been up and down as well, although the two opponents that beat them, Garfield and Crescenta Valley, are a combined 6-0.  El Rancho hangs around but in the end Montebello gets it done.

Good matchup here. Glendora has showed its mettle in wins over Charter Oak and Damien in the season opener. Los Altos hung with St. Paul last week before losing late. The Conquerors beat a talented Covina team in the opener. Los Altos may have more skill guys but the Tartans have more strength up front. Their defense has been solid. Glendora wins a nail biter.

Can Monrovia break though? The last thing the Cats want is to start 0-5 like last year. Valley has one win under its belt but that was against an 0-3 Norwalk team. Monrovia should get this one. Of course I also thought that the last three weeks. We’ll see.

Northview is on a roll. The Vikings are 3-0 having outscored their opponents 127-30. Quarterback James Jimenez, receiver Deshon Thompson and the rest of the offense are putting up big numbers. Don Lugo won last week but the Conquistadores were soundly beaten by Alta Loma and South Hills in their first two games. Greg Gano’s crew just doesn’t have enough to stay with the Vikes. Northview stays unbeaten.

On paper this looks like one of the best Smudgepots in years. J.P. Andrade will be throwing it all over the lot for Bonita while San Dimas will do what it does best- pound it and then pound it some more. Andrade has thrown for 928 yards and 10 touchdowns while the Saints have rushed for 681 yards with Jacob Buccola leading the way with 234. The scoreboard operator is in for a full night’s work, no doubt. The Bearcats will make some big plays but in the end the Saints running attack wears them down. San Dimas by a touchdown.