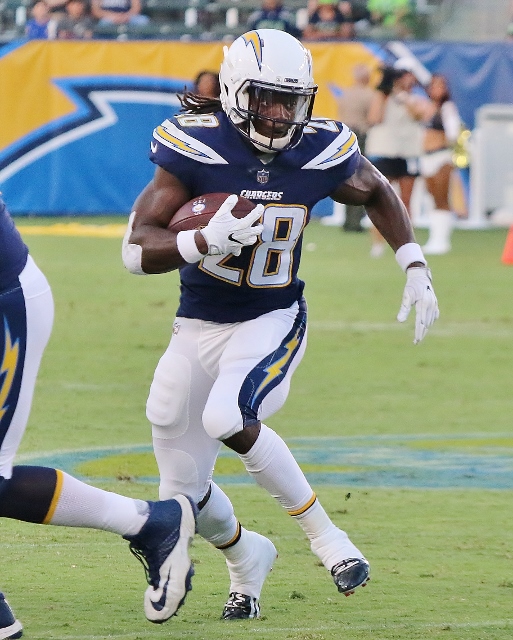 Melvin Gordon scored the first touchdown for the Chargers. (Photo by Duane Barker.)

(Carson) – The Chargers kept Seattle out of the end zone until late in the fourth quarter and beat the Seahawks 24-14 Saturday night in an exhibition game before 23, 211 at StubHub Center.

Seattle managed just two field goals until third string quarterback Alex McGough threw a touchdown pass with 4:31 left in the contest. It was too little, too late though as LA was able to run out a majority of the clock on their next possession before tacking on three points.

Seattle opened the scoring with a Jason Meyers 33-yard field goal on the first drive. With Philip Rivers behind center, the Chargers answered with a nine-play, 70-yard march that was capped by two-yard Melvin Gordon touchdown run.

The Seahawks came back with a 25-yard field goal by ex-Raider Sebastian Janikowski, who is trying to win a job, to make it 7-6.

Early in the second quarter Seattle had a golden opportunity to go up but was thwarted when Chris Carson fumbled at the one-yard line and Brandon Mebane recovered for the Chargers in the end zone for a touchback. 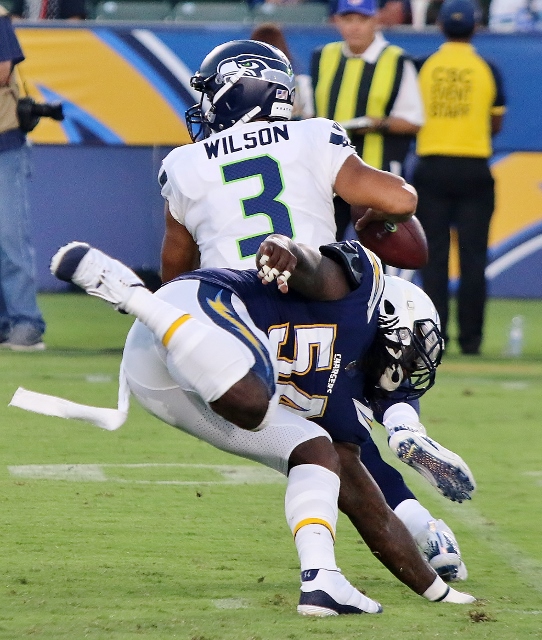 J.J. Jones made a big play returning a Seattle punt 72 yards for a touchdown with 1:54 left in the half to extend the Charger lead to 14-6 and LA took that advantage into the break.

Russell Wilson played the entire first half for the Seahawks going 13 of 21 for 193 yards before Austin Davis replaced him.

The Chargers opened the third quarter with an eight-play, 53-yard drive for a score. Smith hit Mike Williams in the corner of the end zone for a 25-yard TD strike. Williams leaped over Seattle cornerback Akeem King to make the circus catch at the 9:29 mark for a 15 point lead. 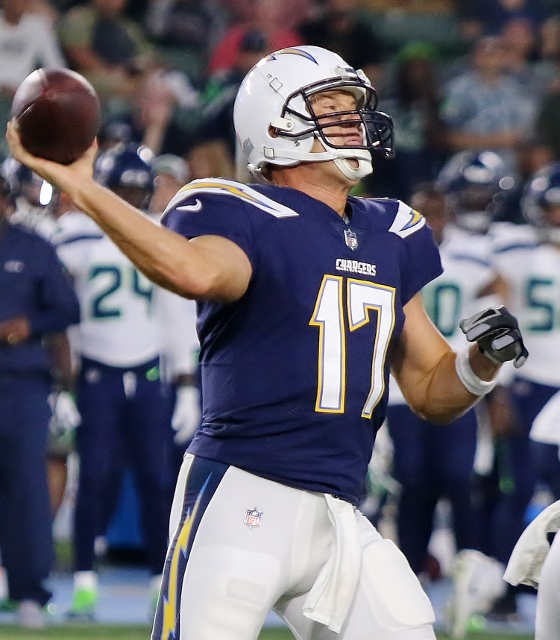 Philip Rivers played the first quarter for the Chargers. (Photo by Duane Barker.)

McGough replaced Davis at quarterback for the Seahawks in the fourth quarter. McGough guided Seattle on a four-play, 59-yard drive and finished it with a 12-yard touchdown pass to Malik Turner. He then completed a pass to Cyril Grayson Jr. for a two point conversion to cut LA’s lead to 21-14 with 4:31 remaining.

Detrez Newsome led the Chargers rushing attack with 78 yards while Gordon had 35 and the touchdown. Jaron Brown had 74 yards receiving for the Seahawks.

With the victory, the Chargers improved to 1-1 in the preseason while Seattle dropped to 0-2.