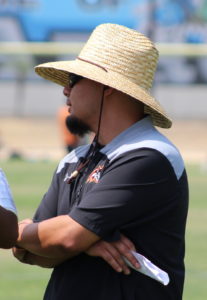 Oscar Robles has been named the new head coach at Nogales.

(La Puente) – Oscar Robles, who was the head coach at Workman last year, was named the head football coach at Nogales Robles confirmed.

Robles, who was an assistant at Northview under Marcel Perez before taking over at Workman last year, led the Lobos to an overall record of 4-7. Workman fell in the first round of the CIF Division 13 playoffs to Santa Clara.

Robles takes over for Richard Salazar who led Nogales to a record of 10-2 and a first round playoff victory. Nogales lost in the second round of the Division 13 playoffs to Silver Valley. Salazar took the head coaching job at Fullerton.

“I feel really good. I’m excited to get going with the kids and everyone on campus. It has been a great environment so far,” Robles said. “I’m Excited about the new opportunities and challenges that await in a new chapter in my life.”