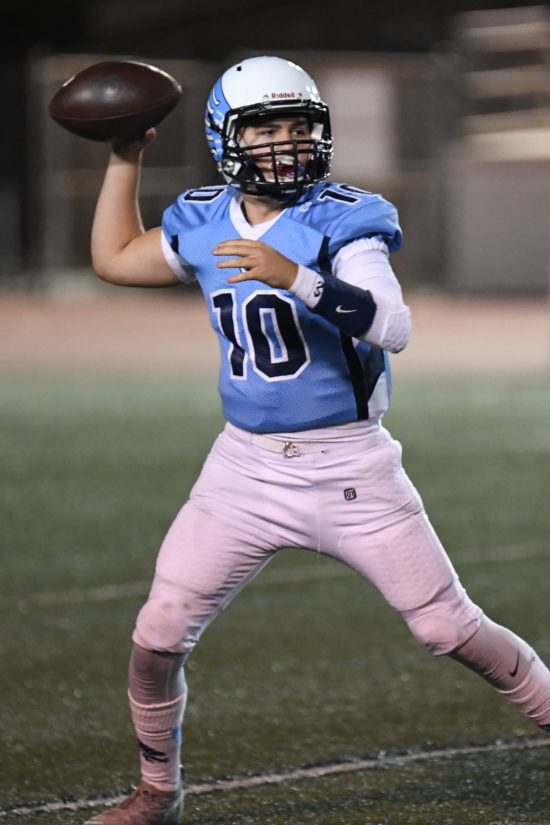 Chase Center and Crescenta Valley have a huge game against Muir. (Photo by Doug Brown).

Valle Vista
San Dimas (6-2) at Rowland (7-1)
Last Year: San Dimas 47-0
Don’t look now but Rowland has won six straight and seven of eight overall. The Raiders surprised Covina two weeks ago and are undefeated in Valle Vista League play. That comes to an end Friday. San Dimas had to fight to hold off Covina last week and now has it sights set on the league title. The Saints take care of business against the Raiders.
San Dimas 38 Rowland 20

Almont
Bell Gardens (3-5) at Alhambra (8-0) (Moor Field)
Last Year: Bell Gardens 44-27
Bell Gardens is the last hurdle for Alhambra on its way to an unbeaten regular season run. BG has had its good moments as well as bad this year. The Lancers have won their last two games against lesser competition but they have struggled versus quality teams. Segerstrom and El Rancho beat them by the combined score of 73-6. This just looks like Alhambra’s year. The Moors have already taken care of Schurr and Montebello. Bell Gardens is next on the agenda. Moors will go unbeaten.
Alhambra 31 Bell Gardens 21

Schurr (3-5) at San Gabriel (3-5)
Last Year: Schurr 42-33
This has been a game that Schurr has dominated in recent years. This might be the year that the Matadors can end that spell. The Mats hung with Alhambra for a half last week and does have three wins so far. Schurr has had its struggles especially on the defensive side of the ball. But a quick comparison of non league opponents shows Schurr beat Rosemead while San Gabriel was blasted by the Panthers 41-13. SG hangs around again for awhile but Schurr gets it done in the end. Spartans by a touchdown.
Schurr 35 San Gabriel 28

Hacienda
South Hills (5-3) at Diamond Ranch (5-3)
Last Year: South Hills 24-21
This is the game of the week as both teams are undefeated in the always rough and tumble Hacienda. This is essentially for the league crown. The Diamond Ranch D has been solid all year and they’ll need to be again to beat South Hills. The Huskies can score as they have shown the last two weeks but can they move the ball enough against the Panthers? The answer is no. Diamond Ranch will make enough stops and grind it out on the ground offensively. D Ranch stays on top in the Hacienda.
Diamond Ranch 24 South Hills 14

Mission Valley
Arroyo (4-4) at Rosemead (5-3)
Last Year: Arroyo 49-7
Arroyo got back on track last week against South El Monte while Rosemead rebounded from a loss to South and took care of business against Gabrielino. Both teams need a win – Arroyo to stay in contention in the MVL and Rosemead to avoid elimination all together. While the Panthers have played well at times do they have enough to stop the Knights passing attack? Arroyo receiver Carlos Hernandez is a load. The Knights offense is just too much for Rosemead. Arroyo wins rivalry game.
Arroyo 34 Rosemead 17

Pacific
Muir (7-1) at Crescenta Valley (8-0) (Glendale)
Last Year: Crescenta Valley 31-7
The battle for the Pacific League title takes place Friday night in Glendale. Crescenta Valley is undefeated while Muir dropped just one- to Grace Brethren. The Falcons offense is high powered as usual. They racked up 87 points in wins over the Burbank schools (Burroughs, Burbank) and lit up Montebello for 56. Last week they dropped 70 on a less than stellar Santa Rosa Academy team but 70 points is impressive even in your front yard. The Mustangs can score as well but can they keep up with Crescenta Valley? They only beat Burbank 20-15 while CV humbled the Bulldogs 45-14. Muir will give it a run. The Stangs may have enough to pull it off. But at the end of the day, or in this case the fourth quarter, the Falcons have too much.
Crescenta Valley 34 Muir 31

Palomares
Ayala (8-0) at Bonita (7-1)
Last Year: Ayala 24-11
Ayala looks like the class of the Palomares. The Bulldogs knocked off Glendora two weeks ago and Bonita is the next big test. Bonita fell to Glendora 28-13 so simple mathematics would tell you that Ayala beats Bonita. But it’s not just that. Ayala is not only perfect in league but all season as well. The Dogs have also beaten strong non league opponents Diamond Ranch and Moorpark. The Bulldogs are for real. They march to 9-0.
Ayala 28 Bonita 21

Valle Vista
Northview (6-2) vs. Covina (3-5) (Covina District Field)
Last Year: Northview 33-12
Covina almost pulled it off last week against San Dimas…almost. Northview stumbled once in league against San Dimas. The Vikings, who can gain the inside track to a second place finish with a win,aren’t about to stumble again. They simply have too much talent. The Colts may give them fits at times but Northview emerges with the victory.
Northview 38 Covina 27