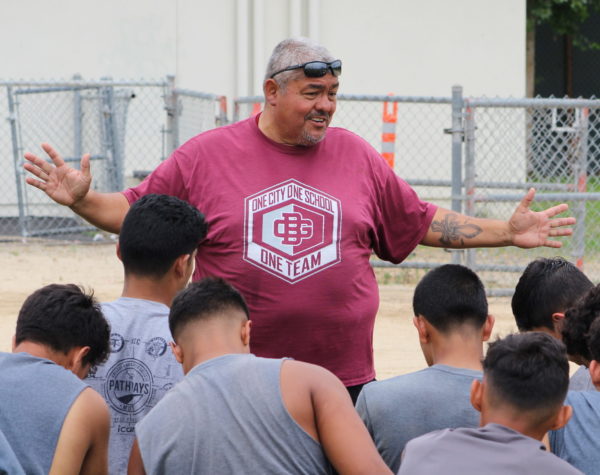 Margarito Beltran has stpped down as the head coach at Bell Gardens.

By Tim Peterson
(Bell Gardens) – Margarito Beltran has stepped down as the head coach at Bell Gardens after four years.

“It’s no big scoop, no big story. There’s always an expiration date and I had set mine at four years,” Beltran said. “I’m not burned out or anything like that. It’s just that I had set the time after my son had graduated and that time has come. It’s just time to move on. The administration at Bell Gardens has always been supportive and it’s been enjoyable coaching these kids.”

Beltran, who previously was the head coach at La Serna, took over for Geoff Ackerman before the 2016 season. The Lancers went 2-8 in Beltran’s first year but bounced back to go 5-6 overall in 2017 and 3-2 in the Almont League which was good for third place. Bell Gardens lost in the first round of the playoffs to Santa Ana.

Beltran’s best year was 2018 when BG finished 4-1 and second in the Almont and 7-5 overall. The Lancers advanced to the second round of the CIF Division 12 playoffs with a win over Pacific before falling to Linfield Christian.

This past season Bell Gardens missed the playoffs going 3-2 in league and 4-6 overall. However the Lancers did push league champion Alhambra into the fourth quarter before coming up short 23-14.

Beltran isn’t actively looking for another head coaching job but would join a staff if the situation is right. “I wouldn’t mind being a position coach if it was a right fit,” Beltran said.

38 Comments to "Beltran Moves on From Bell Gardens"