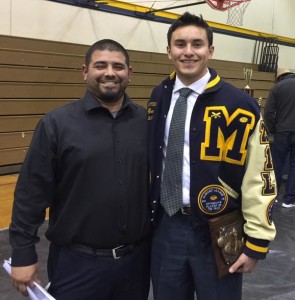 “Executing the Spot Route”
Peter Gonzalez, (son of Montebello HC Pete Gonzalez) is the offensive coordinator at Montebello.
The spot route is becoming a staple in offenses around football, no matter what offensive style or scheme a coach prefers. It can be executed whether the route is run with a Wide Receiver, Tight End, or Running Back.
It can be run by a player who is lining up on the outside of a formation or from the inside of a formation. The flexibility of this route is what I believe is most appealing about it. There are various ways of teaching the route, but I am going to share how we execute it. First, the player designated to run the Spot route is required to locate the first second level defender inside of him. By second level, I mean the first defender in coverage that is backed off from the line of scrimmage. Once the defender is identified and the ball is snapped, the designated player will run his route on a path to the outside shoulder of the defender that he picked out and will work to achieve a depth of five to seven yards.
The player running the Spot route will stay on that path until the defender he picked out crosses his eyes. Once that happens the offensive player will then stop his route and square himself to the quarterback showing his number (or numbers) to the quarterback. Once the quarterback sees this, the ball is delivered to a shoulder where it is safest for the receiver to turn and run. The receiver is trained that if the ball is delivered to his inside shoulder, he is required to turn inside and get upfield in the middle of the defense once the catch has been completed. If the ball is delivered to the outside shoulder, the receiver turns to the sideline and runs to the open field he can find. Once the receiver and quarterback are comfortable with making our first read together, they will be able to determine the “Spot” very quickly, so as a way of protecting the Spot route runner we then move to the last phase of our route execution.

After the initial defender has been identified before the snap and we know the “Spot” we are going to work towards, we then begin to start looking inside to the next nearest defender as they’re running. They learn to check the second defender (typically a middle linebacker) as they are getting ready to settle down in the open Spot and we adjust our Spot if necessary. We teach this aspect of it as well to help the receiver avoid getting blindsided from a linebacker looking to undercut the route or looking for a big hit.

As far as putting this route into a concept, there are many variations that can be used. It can be used as a two route combination with the other receiver running a route designed to beat a specific look or coverage the offense is seeing from the defense. It can also be executed with one receiver and a Tight End or Running Back coming out of the backfield. I feel it’s most common out of a three receiver combination, with usually the Spot route being accompanied with a Flag route (or some type of vertical route) and a flat. Again it can be used with a variety of personnel groupings such as three Wide Receivers, one Wide Receiver and two Tight Ends, or even for those who prefer to play under center with either a drop back or play action and it can be executed with one Wide Receiver, one Tight End and a back whether it be the Halfback or Fullback. This can also be used against various looks from the defense whether it be a zone or man to man coverage, as well as against the blitz.
Note: Under Gonzalez Montebello has had over 3500 yards of offense each of the last four years and at least 2000 yards of passing in three of the last four years. In two of those years the Oilers had over 4000 yards of total offense.
Posted in Chalk Talk | Tagged Chalk Talk, Montebello Football, Peter Gonzalez, Ryan Rivera