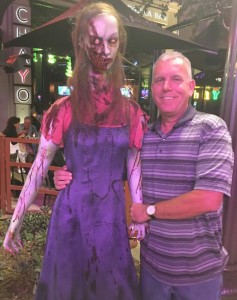 I got lucky in Vegas. The only problem is she’s a Raiders fan.

Before Game 4 of the NLDS between the Dodgers and the Nationals I heard three different interviews of Dodger players and coaches on the radio.

One player said “Our backs are against the wall. It’s do or die.” Another one said “We know what we have to do. Just go out there and win.” And finally the coach said “We have to leave it all out there on the field and give it everything we can. We need to step up.”

Blah, blah, blah…cliche city. It’s not the coach’s fault or the players fault. It’s just what you get in most interviews. Most coaches repeat the same scripted lines over and over again and the players follow suit. It’s why I don’t do post game interviews anymore. If it’s a playoff or championship game or maybe a game that decides a league title I’ll get a few quotes to add something to the story. Otherwise I’m just reporting the facts.

Can USC and UCLA fans finally agree on something? Neither team is that good. USC has won it’s last two just to get to .500. The Bruins fell to Arizona State Saturday knocking them down to the same 3-3, .500 record. UCLA can’t run the ball and USC has had trouble stopping the run. The Trojans have already benched their starting quarterback while UCLA’s starting quarterback is hurt. “USC Sucks!” Yeah we know. “Bruins are in Ruins!” Right, okay. Neither one is going to set the world on fire. Not this year. Hey, just look at it this way, the Crosstown clash should be a great game in November.

I said Arroyo was going to go 9-1 in the regular season. Despite the tie with Covina that was ruled a win and the player suspensions, the Knights are indeed on track to finish 9-1. Yeah, I’m aware that I’ve missed a few, but I nailed this one.

I’ve always thought James Caan was a good actor but after having a short conversation with him a couple of weeks ago on a Friday night he’s a great guy too. He’s the same tough, hard around the edges guy that you see on film and also very passionate in his conservative beliefs. Ask him a question and he’ll tell you how he feels, and not mince words in the process. Also he’s his son’s biggest fan as he encourages the La Salle quarterback from the sidelines. He might be 76, but he’s someone you don’t want to mess with. And if you don’t want to see his blood pressure rise, don’t ask him how he feels about players/coaches taking a knee during the National Anthem.

Sorry to see Blair has decided to cancel the rest of its games for the 2016 season. I don’t necessarily like it but I agree with it. When you only have 20 players on the roster somebody is going to get hurt. It’s a matter of safety at this point. Shut it down for this year, try to get more players involved and see what happens next season. If it’s the same situation next year cancel it again. Football isn’t a sport that you can mess with when it comes to the health of the players. Keppel has also decided to forfeit part of its schedule for the same reasons. Good for both schools.

Speaking of La Salle, Amon Milliner can’t be stopped…even in defeat. The Lancers may have lost to St. Francis last week, but Milliner went for 259 yards and three scores. He has rushed for 1283 yards and 15 touchdowns so far this season. Utah was looking at him last year but so far no offers have come for the senior. Somebody is missing out on this guy.

I’m still not completely sold on 6-0 Arcadia. The win over Burroughs was nice but let’s see what happens this week against Burbank and November 4 versus Crescenta Valley.

Anybody else having trouble stifling a yawn when someone mentions the Lakers?

Two undefeated teams reside in the Hacienda League with Los Altos and Charter Oak both sitting at 6-0. The two will meet October 28 at Charter Oak. The Conqs get Walnut this week while the Chargers travel to Chino. Cathedral and St. Francis, also both 6-0 in the Angelus League, will meet October 28 at Cathedral. Circle that date on your calendars.

Looks like the Dodgers left it all out there on the field.

I met this great girl in Las Vegas this past weekend. The only problem is she’s a Raiders fan.