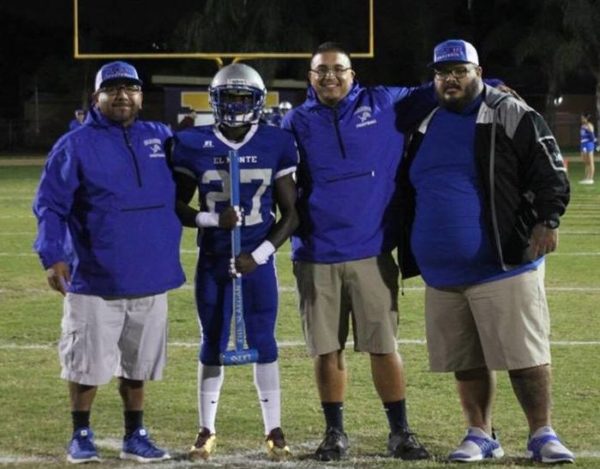 Just over a year ago Darlin Nkouanyep was watching a group of kids playing a game he had never seen before. Now he’s a returning Mission Valley League All League linebacker for the El Monte Lions.

At the age of 11 Nkouanyep saw his parents get arrested in his home country of Cameroon which is going through a Civil War.

Nkouanyep and his siblings then went to live with his aunt until she passed away when he was 13-years old. From then on they were homeless but would occasionally spend the night at friends homes. But Nkouanyep always made sure they made it to school consistently.

In January 2017 a family friend told Darlin and his siblings he was going to get them to the United States. On January 18th they went from Cameroon to Morocco, Spain and Mexico before finally finding their way to Texas. They weren’t there for long as Nkouanyep was sent to Chicago where he was placed in a detention center from February through May.

On May 5th, Nkouanyep was sponsored by Abraham Kicha and his family that resides in El Monte.

While enrolling for school Nkouanyep noticed a bunch of kids playing a game he didn’t know – it was El Monte’s football team. An assistant coach and father at the time and newly hired El Monte Head Coach Jesse Ceniceros Sr. approached Darlin and let him know he was more then welcome to come and try out some American football.

Only two days later Nkouanyep had all of his paperwork turned in and was out practicing with the team.

It took awhile but week by week Darlin got better and his no fear attitude and 100-mph way that he plays the game earned him a spot on special teams and by the time league started he was a starting linebacker for the Lions.

Now heading into 2018 Nkouanyep has become an outspoken leader for a team which is returning a majority of its players from last year.

Darlin says his “brothers and family” on the team fill some of the void of not talking to his parents since February.

CIF recently granted a extra year of eligibility for Nkouanyep after he missed over a year of school while trying to make it to America.

“All of my coaches have taught me alot and how to fight back in real life”, said Nkouanyep.

Darlin will be starting on a defense that has nine returners and will see time at running back for an offense that also is returning nine players.

El Monte HC Jesse Ceniceros said Nkouanyep fits right in. “Darlin is a perfect example of, don’t wish for it work for it”, which is an El Monte motto.