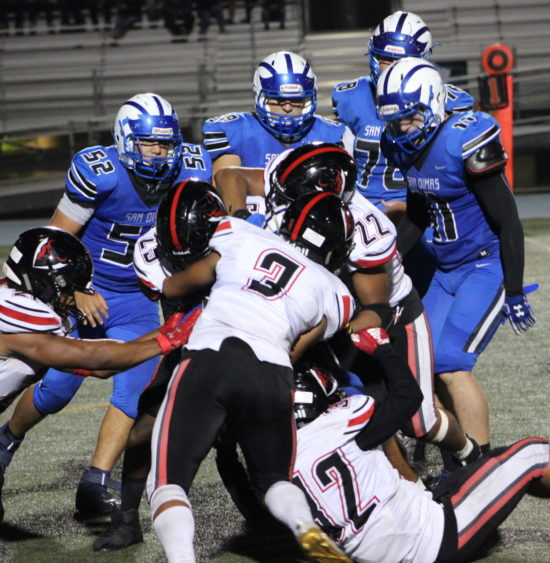 The Saints will try to circle in on the Finals when they host North Torrance Friday night.

All Kickoffs are at 7:00 p.m. unless otherwise indicated

DIV 5
St. Paul (11-1) at Culver City (12-0)
St. Paul has shown it can bang with the big boys. The Swordsmen are physical on defense and offense as well when they pound the ball with Trenell Ridgley. Culver City has a prolific offense led by quarterback Zevi Eckahus who has thrown for 3,778 yards and 53 touchdowns. The Centaurs racked up 63 points last week against Chino Hills. But they haven’t faced a defense like St. Paul will bring. The Swordsmen get it done.
St. Paul 27 Culver City 24

Aquinas (10-2) at Glendora (11-1) (Citrus College)
Glendora just keeps plugging along. The Tartans only loss came against Palomares League champ Ayala in October. Aquinas stumbled twice to open the season but has been perfect since. The Tartans advantage is that they came from the Palomares where every game is like a playoff game. Glendora looks ready to make a title run. Tartans advance.
Glendora 24 Aquinas 17

DIV 6
San Jacinto (10-2) at La Serna (12-0) (California)
Everytime the feeling is that La Serna is in for a tough battle the Lancers dismantle its opponent. Last week against a talented Los Altos team the Lancers won by two touchdowns. The week before they dropped 56 on Warren. La Serna looks like a team ready to run the table. San Jacinto hails from the Mountain Pass League and last week blanked Kaiser. The question is can the Tigers control the Lancers’ offense? The answer is no. La Serna is headed to the finals.

DIV 9
North Torrance (10-2) at San Dimas (11-1)
I picked against San Dimas last week and am still hearing about it. For the Saints everything is coming together at the right time. Their defense held down a powerful Foothill team last week and their offense, with a devastating running attack led by Nick Cuda, is as explosive as its been all year. North Torrance finished second in the Pioneer League and is a formidable opponent but the Saxons didn’t face the schedule that San Dimas did. Saints take the next step.
San Dimas 31 North Torrance 28

DIV 10
Katella (11-1) at Crescenta Valley (12-0) (Glendale)
Crescenta Valley is another team looking to run the table. The Falcons really haven’t been tested all year. Their closest game was a nine point victory over Palos Verdes in the first round of the playoffs. They do it with a potent offense that last week dropped 45 on Eisenhower. Katella can score too but in the post season the Knights had to win a couple of defensive battles. If it comes down to a shootout Katella is in trouble. The Falcons have too much firepower to get outscored. CV gets the W.
Crescenta Valley 35 Katella 28

DIV 11
Muir (10-2) at Linfield Christian (9-3)
Many of the locals were hoping for a “Turkey Tussle” rematch in the Division 11 semi finals but Linfield Christian ruined that by beating Pasadena last week. Muir should have a clear path to the title. The Mustangs have more talent than Linfield and they beat Pasadena handily 33-0 while the Lions struggled to beat the Bulldogs 28-21. The long bus ride to Temecula won’t do Muir any favors but it isn’t anything the Stangs can’t overcome. Muir takes the lead early and holds on for the win.
Muir 27 Linfield Christian 21

DIV 12
Jurupa Hills (11-1) at El Monte (12-0)
Everybody was talking about El Monte-Rio Hondo Prep. That was going to be the game. The two teams were headed for a collison course in the semi finals. However Jurupa Hills said not so fast and here we are. Like El Monte Jurupa Hills has rolled over nearly all of its opponents. The Spartans did suffer one setback – a 35-27 loss to San Gorgonio in October – but other than that it’s been smooth sailing. If you wanted an RHP-EM showdown well this one might be better. You have to look it this way. Jurupa Hills beat the Kares, so the Spartans are better right? El Monte can’t take them for granted. Jesse Ceniceros will make sure that doesn’t happen. Lions to Finals.
El Monte 38 Jurupa Hills 31

DIV 13
Alhambra (12-0) at Ramona (10-2)
Alhambra has not only stunned the Almont now the Moors have the opportunity to shock the entire San Gabriel Valley. Ramona finished third in the River Valley and lost to the top 2 teams by the combined score of 85-20. The Moors meanwhile had a couple of close games in league with Montebello and Bell Gardens, but they destroyed everybody else in their path. Alhambra won’t stumble here. The Moors have their sights set on the Finals.
Alhambra 42 Ramona 14