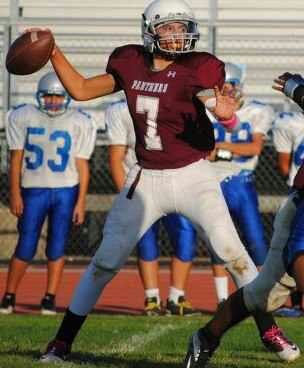 Marc Paramo’s top five while his time as assistant and head coach at Rosemead High School. He is currently the defensive coordinator at Pasadena City College.

1. Travonte “Tra” Sumler (RB/LB, Rosemead) What can I say about this young man aside from he was a bonafide bad ass! Coach Oviedo (our OL coach) said it best “It feels good going into every game knowing you have the best player on the field”. His senior year he led us to the finals on a team that was first in the state in turnovers per game and was one of the top guys in rushing. He also did well playing against quality opponents: South Hills, Monrovia, Harvard Westlake, Covina, Temple City, San Dimas, Valley Christian, and Paraclete. He was just as physical on offense as he was on defense. One last note, his first game at Fullerton CC he had over 10 tackles, a fumble recovery, and I believe a blocked punt in one half of football before tearing up his knee. Dominant!

2. Luis Diaz (TE/DE, Rosemead) I’m probably one of the only coaches who is doing this that put a tight end on the list. So what does that tell you! Luis was a stud. He was 6’2” 240 lbs and ran as fast as our receivers. The way we ran the ball in Coach Koffler’s offense, Luis was open all the time in our play action game. He has soft hands and was a great route runner. He could also block the crap out of people. On defense he was the man, speed rusher at his size but could play the run with like a 3 tech. We need more of him back in the game.

3. Matt Fregoso (RB/DB, Rosemead) Another incredible back in our offense at Rosemead HS and one of the smartest defensive players at any position I have ever coached. He carried the load his senior year. It was a miracle we got to the Second Round of the CIF Playoffs and it was due to him. The first round game against TC he rushed for 367 yards and 7 touchdowns (Take that Al Bundy). He was a team captain and as selfless as they come. He was also a two sport athlete that dominated at wrestling, placing in state his senior year. Arguably should have been the athlete of the year IMO!

4. Joshua Casey (OL/DL, Rosemead) With all the incredible backs we had over the years at Rosemead HS I’d be reminded to not place an OL on this list. Josh stud 6’3” 255 and was athletic as hell. He could man black and pull with the best of them. Mind you this was before we put in any inside/outside zone it was all pitch, power, ISO, and counter. Josh could mall a defensive lineman and could easily level up to the LB. He didn’t just play the part he looked it as well. He is also an incredible human being. Josh also was great wrestler at Rosemead HS.

5. A) The Chavez Brother’s: Ceasar and Jasper Chavez epitomize what a Rosemead HS player should be. They were hard working, dedicated, never missed, arguably the strongest pound for pound in the weight room, hard-nosed, under sized bad asses. They also were great in the classroom and beyond respectful. They may not have been flashy or got the recognition they deserved by others but WE as a staff new how important they were to us as a team. Jasper is finishing up his last year as an All Conference LB at Kansas Wesleyan University and Ceasar Chavez is a fireman (hot shot I believe).

B) I need to put a 5B because this list Needs a QB. We had two of them that Need recognition, Angel Alejandre and Steven Nava. Angel led our team to the CIF championship and was incredibly accurate and intelligent. He was a quiet leader but commanded the offense. He had a sweet touch on the ball. Very Drew Brees like and was well liked. Steven Nava was our confident brash QB. He had a strong arm and could make every damn throw imaginable. He threw for over 3000 yards and 30 TD’s to 5 Ints his senior year. Not sure another QB at Rosemead can say that aside from our legend Matt Koffler himself.