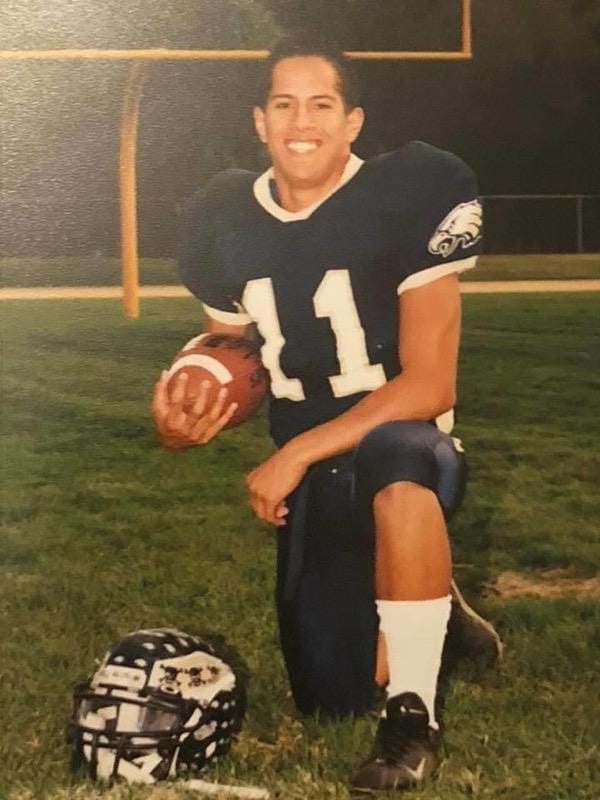 Lee Aguirre is number one on Erick Escamilla’s Top 5.

Former South El Monte HC Erick Escamilla chimes in with his Top 5. Escamilla was the Eagles head coach from 1997-2009.

1. Lee Aguirre QB/DB 2003-2005: By far the best overall player SEMHS has ever had! We nicknamed him General Lee for his overall ability to lead his team. Linebacker mentality at QB!! We could not allow Lee to hit during practice as he took out too many of his own teammates! All CIF QB, hardest hitter on the team and overall team leader of the ’05 team that went to the Semi’s! Also part of the League Champion 4 X 100 Relay team! Went on to Fullerton JC as a DB where he was an All-American then on to play DB at BYU!!! What a stud! Came up with the slogan, “Don’t Doubt the South!”

2. Tommy Cogburn: WR/DB 2005-2007: “White Lightning” as we referred to him, Tommy would consistently take a 5 yard pass and turn it into a 80 yard TD in the blink of an eye!!! Led the State in yards receiving in 2007, also ran 10.4 in the 100 m in Track and was the anchor leg of the MVL Champion 4×100 Relay Team! Anytime Tommy touched the ball, the crowd would get up on their feet to see the excitement that was surely coming up! Never saw anyone able to cover him one on one but he could shut down an opponent when needed on the defensive side. Punt return and kick return became big plays for us due to Tommy Boy!!

3. Armando Villa: OL/DL: 2003-2005: All CIF OL/DL on the Semi’s team led by Lee Aguirre, but what a beast Mando was on both sides of the ball!! By far the hardest practice player I’ve ever had!! We had to take Mando out of live scrimmage due to his tenacious and ferocious attitude during practice!!! “Save it for Friday” was the common message to Mando!! Also CIF Basketball player for SEMHS!!

4. Steve Espinoza: RB/LB: 1996-1998: All CIF RB/LB and truly a two way player, never came off the field! Rushed for over 1500 yards and had over 100 tackles in 1997. Incredibly strong in the weight room setting numerous records for us in 1998! Steve was an incredible combination of speed and strength, he was also part of the league champion 4:100 relay team!

5. Jose Garay: QB/DB: 2006-2008: All CIF QB; holds every passing record at SEMHS including most TD passes for a game, season and career. He is now Dr. Garay as he has earned his PhD since finishing his career at the University of La Verne. A true Student/Athlete who also played basketball and baseball for SEMHS.

**Honorable Mention: Sal Tovar: Even though I did not coach Sal I had him as a student in my History class for two years and I thoroughly enjoyed watching him carry the ball and shattering all rushing records at SEMHS! Led team to CIF Semi’s as well and even though everybody knew he was getting the ball he still rushed for over 2000 yards his Senior Year!

Best Players I coached against:
Shaun Cody: Los Altos: unstoppable at DL no matter how many we put on him!! Went on to USC and Detroit Lions!
Adam Tate: Alhambra: What a stud running back, was a man among boys when he had the ball!
Ronnie Williams: Arroyo: a tremendous defensive player, had to put two on him every play in order to have any success!
All the Sumler’s from Rosemead HS: Damn it just when one graduated here came another!! Great all around players; Offense, defense, and Special Teams!!!