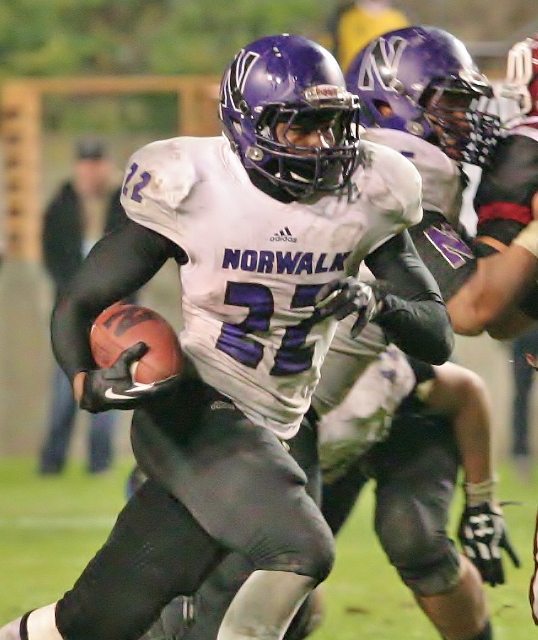 Rashaad Penny is in Jesse Ceniceros Top 5 players that he ever coached. (Photo by Duane Barker).

El Monte HC Jesse Ceniceros gives his top five players from his time at Norwalk, Bloomington and his current spot at El Monte.

1. Dixon Diaz- (OT, Norwalk) A three year starter who anchored probably the most dominant line in the history of Norwalk High. During his 3 years, the Lancers rushed for 14,054 yards. Diaz was probably the most physical O Lineman I’ve ever coached. He had a nasty attitude and because of it, he dominated all of his opponents.

2. Ronnie Adams- (RB, Bloomington) : Adams was the 1999 CIF Division VIII Offensive player of the year and was on the 1999 LA Times All Star Team. He was the quickest laterally gifted running back I’ve ever seen.

3. Elijhaa Penny- (RB/DE, Norwalk) EJ was an All CIF running back, was on the Long Beach Press Telegram All Area Team and a All Suburban League player. He is in his fifth 5th year in the NFL with the New York Giants. The most intimidating high school running back I’ve ever seen. He was not going to be tackled by a single opponent. Usually had to be tackled by 3 or 4 defenders.

4. Davon Booth (RB/DB, El Monte) In two years of high school football he was a two time MVL MVP, Division POTY, MVS POTY, LA Times Back of the Year, Tribune POTY, All Southern California and two time All State. This kid didn’t get tackled. Seriously watch film. The only time he was stopped, was usually because he ran out of bounds. The moment he stepped on the field, it was showtime!

5. Rashaad Penny (RB/DB, Norwalk) All Suburban League MVP, MVS POTY, Long Beach Press All Area and All CIF. What can you say about a first round draft pick for the Seattle Seahawks in 2018? The most gifted, fastest, and most studious player I’ve ever seen. The off-season between his junior and senior season, I knew he was going to be something special. Run, catch, throw, punt, kick intercept, tackle…he did it all with style and grace unlike anyone I’ve ever seen.

(4468)
$549.99 (as of n/a - More infoProduct prices and availability are accurate as of the date/time indicated and are subject to change. Any price and availability information displayed on [relevant Amazon Site(s), as applicable] at the time of purchase will apply to the purchase of this product.)

(5921)
$99.99 (as of n/a - More infoProduct prices and availability are accurate as of the date/time indicated and are subject to change. Any price and availability information displayed on [relevant Amazon Site(s), as applicable] at the time of purchase will apply to the purchase of this product.)