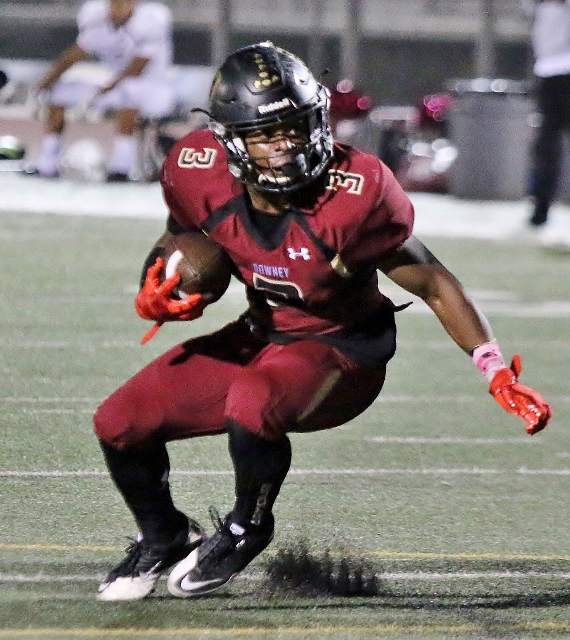 Jack Williams has had a hugely successful run at Downey for the last 10 years which includes a CIF championship in 2012. Here are his Top 5 players that he has coached and coached against:

We owe all the success we’ve had over the last decade to these and the rest of the athletes that have come through our program. This is my 10th year, I have coached and coached against some DUDES! Here are the guys that come to mind.
It was very hard for me to just pick a top 5. So I snuck in a few at honorable mention.

Top 5:
1. Jalen Thompson – the hardest working kid I’ve ever coached. Day in and day out literally always on the field and in the weight room. Not only a stud on the field but a stud off the field. And it all paid off for him. Back to back 1000 yard reception years and holds school record for longest INT(103yds) and INTs in a season(8). He went on to play at Washington state university and is now currently the starting Safety for the Arizona Cardinals.

2. Baraq Ross – Man talk about explosive and a game changer, he was hard to tackle. And that was only IF you were able to even grab him. He was a huge reason for our 2017 CIF Finals appearance. Outside of talent, he was the epitome of a TEAMmate. Some of his HS best friends were the OL as it should be! Baraq is now playing at Azusa Pacific University. Along with his play on the field he was even a better human being as he is my 7 year old daughters idol/best friend.

3. Jason Thomas – GIFTED! Natural god given talent. One of the best players that has ever played at Downey High. He was a four year varsity starter and 3 of those years he was All CIF. We literally devised our coverages To leave him 1v1 vs. anyone he went up against, while everyone else was in some type of zone. that’s how gifted and how much trust we had in him. His senior year he gave up only 3 catches of 5+ yards. He is now playing at Lamar University.

4. Daevon “Dae Dae” Vigilant – Basically paved the way for all the RBs that have played after him. And actually mentored most of them, like Baraq and Emari Demercado who is now at TCU. That’s the type of football player DaeDae was, Selfless! But when you put the ball in his chest you knew something special was always going to happen. He was a true leader. He is ASB vice president, President of his Fraternity, and still playing football at New Mexico State.

5a. Robert “Sally” Salazar – this was a tough one for me so I split it into a 5a and 5b. To begin with Sally had his jersey retired upon graduating. Without him, orchestrating the entire defense we might not have pulled it off against La Serna’s high powered offense in the 2012 CIF Championship. Sally knew every single check, call, and adjustment in our playbook like the back of his hand. Leading into the 2012 CIF championship game vs. La Serna we gave him complete control of the defense and called the whole game himself. He stood at a killer 5’9 and weighed 185 lbs. and ran a 5.1-40. But made every play from his LB spot. He holds records for career total tackles(385) and tackles in a season(154).

5b. Jacob cook – Cook was not to be messed with, even coaches knew when they approached him they had to be on their A-game or he’d sniff out the BS. He very much could have also added assistant coach to his titles. He was a grumpy old man, because HIS defense needed to be perfect. He basically took the reigns from sally and said “I am the captain now!”. He led our defense his senior year right into the 2014 CIF championship game. He once checked one of our young dbs in the middle of a game for a broken assignment, it wasn’t a pretty sight, but that rookie is now the safety for the Arizona Cardinals. Not only a great football guy but went onto Cal State LA to play baseball.

Honorable mention:
1. Dallas Lopez – Probably the best all round athlete to ever come out of Downey. Threw for 3000 yards ran for 1000. Avg, 10 points and 11 boards and ran track. Was All CIF for both football and basketball. One of the smartest we’ve had, and a great leader.
2. Chris Blanton – 25 sacks in a season. 6 in one game vs. Cathedral along with a scoop and score. Known as a technician. Very crafty and one of the most explosive get offs.
3. Jabari Ruffin – Mr. do it all. The guy that started the up rise of DHS, DE, LB, SS, WR, TE, RB. Kid had a crazy motor where he had no shut off switch. Went on to play for USC
4. Justin Huff – This kid was the best RB to ever play in the city of Downey. If he could have made some better decisions, he would be in the NFL. Sophomore year he rushed for 2800 and 40 TD’s. Unreal!