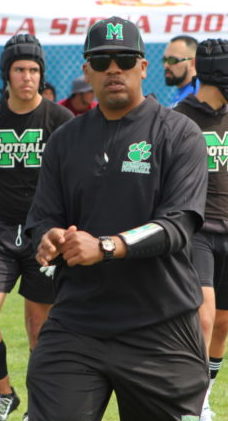 Monrovia HC Chris Williams gave us some time for a Q & A.

Chris Williams, after a few previous area coaching stops, has been the head football coach at Monrovia for the last two years. He has an overall record of 15-8 and a Rio Hondo League championship. I had the opportunity to have a recent Q & A with him.

Q: How are you and your coaching staff communicating with your players during this current pandemic?
A: Our staff set up a Google Class and meet group. We were meeting Monday-Thursday and had individual meetings online with coaches. It took a moment to work out the bugs, but it’s going well.

Q: When did you decide you wanted to be a high school football coach?
A: I decided I really truly wanted to coach when I went to watch my Alma mater (Workman) practice after I graduated from SUU. I felt I could help, which in my first year was thrown into the asst. HC spot and OC. We went from 1-9 to 7-4 and playoffs in my first year. I was hooked after that.

Q: What was your first coaching job?
A: Workman High Varsity OC

Q: How did your previous coaching jobs, including HC at Baldwin Park and OC at Northview, prepare you for the Monrovia job?
A: Yes I was at Baldwin park for 2 years. My first year was the my greatest struggle and lesson in coaching. We went 0-10. I really doubted coaching was for me. But I leaned on my close friends, and just blocked out all the noise and distractions. We regrouped that off season. The boys had a chance to get to know me and what I was about. And that next year we bounced back 7-4. My time after at Northview was great. One of the best staffs I’ve been apart of. That time at Northview helped me regroup, and Marcel Perez really gave me the freedom as an assistant to do what I felt was best for the team. It’s a reason why as a head coach now, I let my coaches coach. I trust they will do their best to get our team ready. No coach wants to be micromanaged.

Q: What coach had the biggest influence on you and why?
A: My biggest coaching influences were my head coach at Workman Piero Yarbrough. At that time he was one of the very few black head football coaches around this area. Yarbrough was always honest with me and still to this day I visit and take in any words of wisdom he’s willing to share. My second was Robert Binky Benton at Mt.Sac. Coach Bink is the best coach I’ve ever had. I learned more about the game and playing RB from him than anyone. Coach Bink was tough, fun, and most important loyal. He helped me secure my scholarship to SUU even though my last year at Mt. Sac he had left to another school. Bink was loyal.

Q: Last year Monrovia went 10-2 overall, won the Rio Hondo League championship, and advanced to the 2nd round of the CIF Division 9 championship. How does this year’s squad look?
A: Yes we had good season last year. I think Monrovia is heading back into the direction where most expect Monrovia to be at. We have a lot of talent returning from last year’s group. And guys that could have started easily at other schools, but have waited and worked hard. That I feel will have break out years. And also a couple talented kids have transferred in. I’m excited.

Q: In your opinion will there be a season this year? If so what will it look like? Will it be abbreviated?
A: Yes there will be a season, regardless if it’s in the fall or winter. There will be football. I think if we start on time things will be as normal just the number of spectators will probably be limited. And maybe no state playoffs. If things take a turn for worse, and another shutdown happens, then we might have to look at a shortened season – 7 games and playoffs.

Q: Who are the top 5 players you have coached?
A: 1. Steven Comstock QB (Northview) Leader, great work ethic, and unbelievable athlete.
2. Antwaun Ayers WR/FS (Northview) Kid was a instant game changer. On both sides of the ball and special teams. Best all around!
3. Jayson Miller WR/DB (Baldwin Park) Effortless smooth athleticism. And maybe smartest player I’ve ever coached
4. Mario Minor WR/DB (Monrovia) This kid was a grinder worked hard every day on and off the field.
5. Alex Camacho RB/LB (Northview) Best pure football player I’ve ever coached. Hustle, smart, and physical.