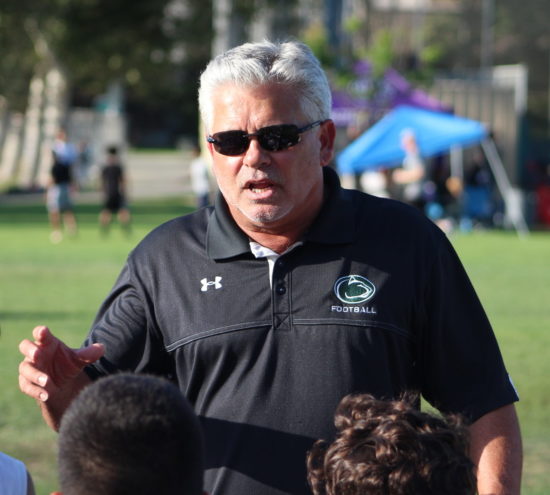 Bonita HC Steve Bogan has been a head coach for 26 years for 3 different schools.

Steve Bogan has been an area head football coach for 26 years including a 20-year stint at South Hills where he won 4 CIF titles and 10 league championships. He then spent four years as the head coach at Maranatha before taking the helm at Bonita prior to the 2018 season. His resume includes over 200 victories. Recently I had the opportunity to have a Q & A with him.

Q: How are you and your coaching staff communicating with your players during this pandemic?
A: The communication has been mostly about continuing to train and be ready. We sent out a professionally put together non-weight room workout program for those without access to weights. Those who have access to weights have their Spring – Summer workout books. We believe we’ll get going in August, at the latest, but no one knows for sure.

Q: I know you played your high school football at Edgewood. What position did you play?
A: I played QB/TB and CB as well as returned punts and kick offs.

Q: Did you play football after high school? if so where and what position?
A: I played my college ball at Cal Lutheran, summer home of the Dallas Cowboys. Many of the guys I played with have coached, some in the NFL, some D 1 … it is truly a cradle of coaches. At the time, 1970s and 80s, Cal Lutheran, under Coach Bob Shoup, was the dominant small college football program on the West Coast. Never lost to APU, at the time, and played the likes of Sac State and UC Davis. It was a blast to play at Cal Lu, great crowds, and nothing but great memories.

Q: When did you decide you wanted to be a high school football coach?
A: My high school coach, Ken Wells, told me I was going to be a coach. He said it a number of times, and always said in such a way that I sensed it wasn’t an option. Eventually I figured out that Coach Wells was right, and that coaching at the high school level I could pursue 2 of my 3 main interests in life.

As the son of a WWII Colonel, in the Air Force, we talked history all the time, usually at the dinner table. As the son of a USC graduate we went to USC football games as far back as I could remember. At the high school level I could continue both of those interests in history and football. My third interest was God, … was there really a God. I could never adequately explain Jesus without there being a God, so I got my MA in theology, and continue to read today, all across the areas of history and faith. Reading keeps me growing.

Q: What was your first coaching job?
A: My first job coaching was at my alma mater, Edgewood … it was a blast. My first teaching – coaching job was at St. Francis H.S. I was there for three great learning and growing years. One of my mentors, Tom Moran, is now the principal at St. Francis. The others: Brian Fogarty, Terry Terrazone and Jim O’Conner. Those men, along with the Dean Pete Brang, got me on a good track, but more importantly they modeled doing the right thing before all other things. They are great people, and St. Francis is still a great place!

My old JV baseball coach Karl Major, an AP at South Hills, convinced me to take a job at there in the mid-eighties. I went from an assistant to eventually being the head coach, learning tons from retiring HC Jack Nemzek. I ended up having as enjoyable a run as anyone could ask for. I worked for and with great people at South Hills. Under the leadership of Judi North and Steve Arkle, I once again worked for people who truly were about the right things. Coach Arkle, who coached me in a high school all-star game, became a wise counsel and tremendous friend. Judi North is one of the most Renaissance people I’ve ever known. She is a great intellect, leader, and friend.

Q: What coach had the biggest influence on you and why?
A: My high school coach Ken Wells was the greatest influence. He just passed away this past year, and was a Bonita High alum. He was bright, intense, funny, and most of all, he was real. There is a saying that “the most important things are caught not taught.” I feel I caught from Coach Wells a quiet intensity and persistence. If you played for coach, you knew that quitting was the worst thing a person could do.

Q: Last year Bonita went 8-3 overall and fell ln the first round of the Division 9 playoffs to Highland. How does the squad look this year?
A: This will be my third year at my old coach’s alma mater, Bonita. Bonita is very special. It is kind of like a high school version of Stanford. It has very high academics as well as athletics. The community is very supportive. The people who live in La Verne, genuinely love their town. Our Principal, Kenny Richie “gets it.” He knows that learning takes place everywhere, and so he genuinely tries to support everything.

In terms of football, we went to the semi-finals in 2018, losing a tough close one. The team was easy to coach and would have made Coach Wells very proud – they were intense, enjoyed themselves, and never quit. This last year was a real tough one. On the field, we got paired with one of the most talented teams I’ve ever seen in a first-round game. They were loaded with sit out guys and blew through our whole division, including us.

However, the whole season was a challenging journey for another reason. It was very tough because we lost our friend, coach, and colleague, Coach John Langilotti, to pancreatic cancer. Coach was a person that I grew to love as a friend, and respect as a tough man of God. He was a tough driving coach who also made sure his players knew he loved them. He lived through many challenges, in his life, which gave him a genuine heart and wisdom that had a huge impact on our players. Observing the way he battled for his family, and the way our young men persevered, playing their asses off, made Coach Langilotti, and all of us, proud.

The team was 8 and 3 on the field, but the season was extremely “abundant” in terms of the most important things in life.

Q: In your opinion will there be a season this year? If so what will it look like? Will it be abbreviated?
A: I am confident that we will have a season. It probably won’t be a regular 10-game season, most likely a shortened season, with a late start. But we will play.

Q Who are the five best players you have ever coached?
A: I don’t have a five best players. I’ll leave that to others. I just want all the young men we coach to be the best “them” they can be. Success in our mind is fulfilling one’s “call” in life. The Bonita district has a great way of putting it, “living your purpose.”

In his influential book The Great Good Place, Ray Oldenburg (1989, 1991) argues that “third places” are important for civil society. Home is our first place, work and or school is our second place; and choir, ASB, athletic teams, clubs, etc. are third places. Almost all emotionally healthy adults have a great third place in their lives. Part of what we try to do is to provide a Great Third Place … and at the same time, win all of our games! We want to be a Great Third Place, and Win! And those values are not contradictory.

2 Comments to "Q & A with Bonita HC Steve Bogan"