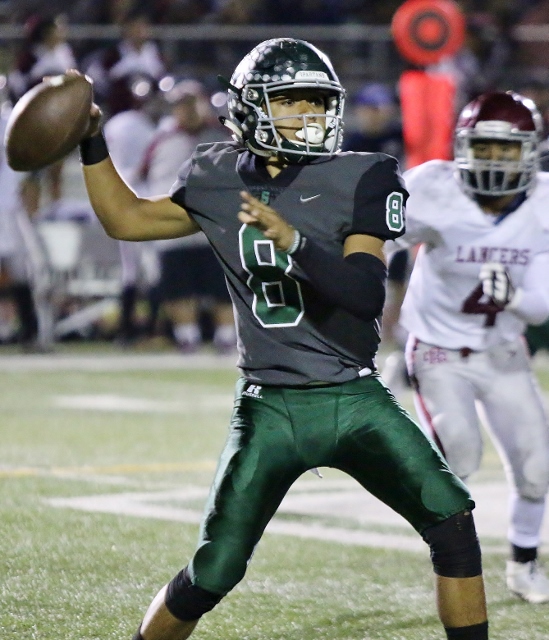 Schurr quarterback Miguel Aguero is one of the Top 5 players that Eric Elias has ever coached.

Eric Elias has been an area assistant for the last 15 years. The majority of that time was spent at his alma mater, Arcadia and he also had stops at Buena Park and most recently Schurr. Here are the top five players he has ever coached as well as the top five that he coached against.

1. Todd Golper (Arcadia) (DE,LB,TE,RB,K): One of the most dynamic players. 4 year varsity starter. As you can see we put the kid at pretty much every position possible. Four Star recruit to UCLA. Ranked #9 LB in the nation by scouts.com Ranked #25 Prospect in Cali. 3x All CIF, All league player, was named All Area player. Golper also was named 1st team all state underclass and an All American Bowl selection.

2. Taylor Lagace (Arcadia) (FS/WR) He was our human highlight reel on offense and defense. Big play ability whenever he had the ball. Made play calling easy on a young coach. 3x All League, CIF, Area. Was ranked #46 safety in the nation and went on to play for UCLA as a team captain.

3. Miguel Aguero (Schurr) (QB): an amazing leader on and off the field. He never missed a practice and was a student of the game. Could make every throw and was one of the brightest players I’ve coached. Broke every record-Passing Yards, Touchdowns, Wins etc. STUD. All League All CIF and All Area. He also helped us win the All Star game with a last minute TD pass.

4. Zach Taylor (Buena Park) (QB): One of the most dynamic QBs I’ve ever had the privilege to coach. He was the heart and soul of the team and a great leader. Wasn’t the biggest QB but he sure played like it. He was ALL league ALL CIF and broke every record for QBs at Buena Park. Lead us to the Semi Final game vs San Clemente.

5. Myles Carr (Arcadia) QB: Size, Strength, Speed, IQ…. This kid had it all, he made coaching the game easy. Went on to Fresno St. 2x All League, CIF, Area.